Before we spend days researching a stock idea we’d like to take a look at how hedge funds and billionaire investors recently traded that stock. S&P 500 Index ETF (SPY) lost 13.5% in the fourth quarter. Seven out of 11 industry groups in the S&P 500 Index were down more than 20% from their 52-week highs at the trough of the stock market crash. The average return of a randomly picked stock in the index was even worse. This means you (or a monkey throwing a dart) have less than an even chance of beating the market by randomly picking a stock. On the other hand, the top 15 most popular S&P 500 stocks among hedge funds not only recouped their Q4 losses but also outperformed the index by more than 3 percentage points. In this article, we will take a look at what hedge funds think about Orion Engineered Carbons SA (NYSE:OEC).

Hedge fund interest in Orion Engineered Carbons SA (NYSE:OEC) shares was flat at the end of last quarter. This is usually a negative indicator. At the end of this article we will also compare OEC to other stocks including Heartland Express, Inc. (NASDAQ:HTLD), Yext, Inc. (NYSE:YEXT), and National Storage Affiliates Trust (NYSE:NSA) to get a better sense of its popularity.

At the end of the fourth quarter, a total of 23 of the hedge funds tracked by Insider Monkey were long this stock, a change of 0% from the second quarter of 2018. The graph below displays the number of hedge funds with bullish position in OEC over the last 14 quarters. With hedgies’ sentiment swirling, there exists a few key hedge fund managers who were increasing their stakes substantially (or already accumulated large positions). 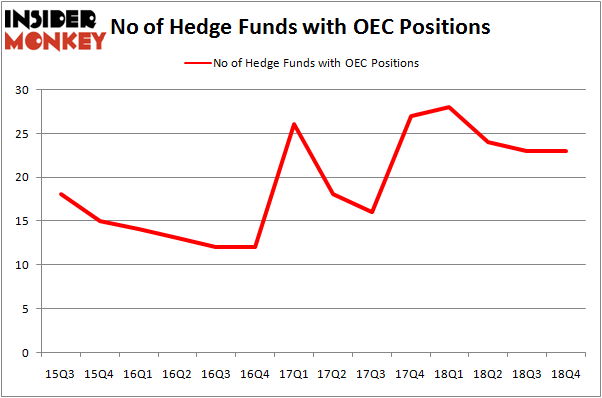 According to publicly available hedge fund and institutional investor holdings data compiled by Insider Monkey, Jim Simons’s Renaissance Technologies has the biggest position in Orion Engineered Carbons SA (NYSE:OEC), worth close to $101.6 million, accounting for 0.1% of its total 13F portfolio. Sitting at the No. 2 spot is Millennium Management, led by Israel Englander, holding a $41.5 million position; the fund has 0.1% of its 13F portfolio invested in the stock. Remaining peers that are bullish contain Amy Minella’s Cardinal Capital, Robert Rodriguez and Steven Romick’s First Pacific Advisors LLC and Tony Davis’s Inherent Group.

Seeing as Orion Engineered Carbons SA (NYSE:OEC) has faced declining sentiment from the smart money, we can see that there lies a certain “tier” of hedge funds that decided to sell off their full holdings by the end of the third quarter. At the top of the heap, Joshua Kaufman and Craig Nerenberg’s Brenner West Capital Partners sold off the biggest stake of the “upper crust” of funds watched by Insider Monkey, comprising close to $54.2 million in stock, and Ken Griffin’s Citadel Investment Group was right behind this move, as the fund sold off about $3 million worth. These moves are important to note, as total hedge fund interest stayed the same (this is a bearish signal in our experience).