A market correction in the fourth quarter, spurred by a number of global macroeconomic concerns and rising interest rates ended up having a negative impact on the markets and many hedge funds as a result. The stocks of smaller companies were especially hard hit during this time as investors fled to investments seen as being safer. This is evident in the fact that the Russell 2000 ETF underperformed the S&P 500 ETF by 4 percentage points during the first half of the fourth quarter. We also received indications that hedge funds were trimming their positions amid the market volatility and uncertainty, and given their greater inclination towards smaller cap stocks than other investors, it follows that a stronger sell-off occurred in those stocks. Let’s study the hedge fund sentiment to see how those concerns affected their ownership of Orion Engineered Carbons SA (NYSE:OEC) during the quarter.

Orion Engineered Carbons SA (NYSE:OEC) has seen a decrease in enthusiasm from smart money recently. OEC was in 23 hedge funds’ portfolios at the end of the third quarter of 2018. There were 24 hedge funds in our database with OEC holdings at the end of the previous quarter. Our calculations also showed that OEC isn’t among the 30 most popular stocks among hedge funds.

How have hedgies been trading Orion Engineered Carbons SA (NYSE:OEC)? 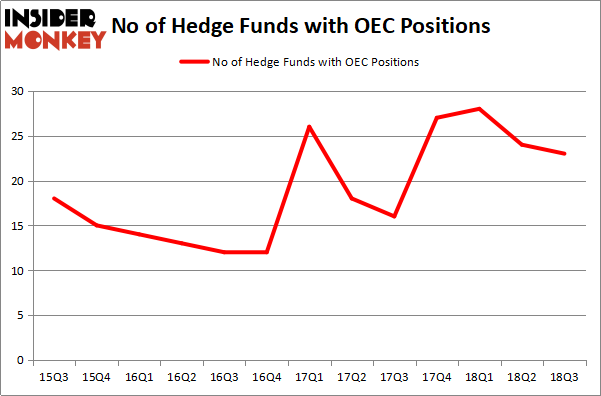 When looking at the institutional investors followed by Insider Monkey, Jim Simons’s Renaissance Technologies has the largest position in Orion Engineered Carbons SA (NYSE:OEC), worth close to $124.6 million, amounting to 0.1% of its total 13F portfolio. Coming in second is Brenner West Capital Partners, managed by Joshua Kaufman and Craig Nerenberg, which holds a $54.2 million position; the fund has 6.7% of its 13F portfolio invested in the stock. Some other members of the smart money that are bullish encompass Robert Rodriguez and Steven Romick’s First Pacific Advisors LLC, Amy Minella’s Cardinal Capital and Noam Gottesman’s GLG Partners.

Seeing as Orion Engineered Carbons SA (NYSE:OEC) has witnessed a decline in interest from the smart money, it’s easy to see that there exists a select few hedge funds that elected to cut their full holdings heading into Q3. At the top of the heap, Clint Carlson’s Carlson Capital dropped the biggest investment of the “upper crust” of funds monitored by Insider Monkey, comprising an estimated $3.8 million in stock. Bruce Kovner’s fund, Caxton Associates LP, also dropped its stock, about $3.7 million worth. These moves are interesting, as total hedge fund interest dropped by 1 funds heading into Q3.

As you can see these stocks had an average of 10 hedge funds with bullish positions and the average amount invested in these stocks was $65 million. That figure was $378 million in OEC’s case. Shutterstock Inc (NYSE:SSTK) is the most popular stock in this table. On the other hand 0 is the least popular one with only 7 bullish hedge fund positions. Compared to these stocks Orion Engineered Carbons SA (NYSE:OEC) is more popular among hedge funds. Considering that hedge funds are fond of this stock in relation to its market cap peers, it may be a good idea to analyze it in detail and potentially include it in your portfolio.