Is Store Capital Corporation (STOR) A Good Stock To Buy?

In these volatile markets we scrutinize hedge fund filings to get a reading on which direction each stock might be going. The latest 13F reporting period has come and gone, and Insider Monkey is again at the forefront when it comes to making use of this gold mine of data. We at Insider Monkey have plowed through 835 13F filings that hedge funds and well-known value investors are required to file by the SEC. The 13F filings show the funds’ and investors’ portfolio positions as of December 31st. In this article we look at what those investors think of Store Capital Corporation (NYSE:STOR).

Store Capital Corporation (NYSE:STOR) shares haven’t seen a lot of action during the fourth quarter. Overall, hedge fund sentiment was unchanged. The stock was in 20 hedge funds’ portfolios at the end of December. At the end of this article we will also compare STOR to other stocks including James Hardie Industries plc (NYSE:JHX), Athene Holding Ltd. (NYSE:ATH), and Graco Inc. (NYSE:GGG) to get a better sense of its popularity.

We leave no stone unturned when looking for the next great investment idea. For example we recently identified a stock that trades 25% below the net cash on its balance sheet. We read hedge fund investor letters and listen to stock pitches at hedge fund conferences, and go through short-term trade recommendations like this one. We even check out the recommendations of services with hard to believe track records. Our best call in 2020 was shorting the market when S&P 500 was trading at 3150 after realizing the coronavirus pandemic’s significance before most investors. Keeping this in mind we’re going to go over the recent hedge fund action regarding Store Capital Corporation (NYSE:STOR).

Heading into the first quarter of 2020, a total of 20 of the hedge funds tracked by Insider Monkey held long positions in this stock, a change of 0% from the previous quarter. By comparison, 24 hedge funds held shares or bullish call options in STOR a year ago. With hedgies’ sentiment swirling, there exists an “upper tier” of key hedge fund managers who were upping their holdings substantially (or already accumulated large positions). 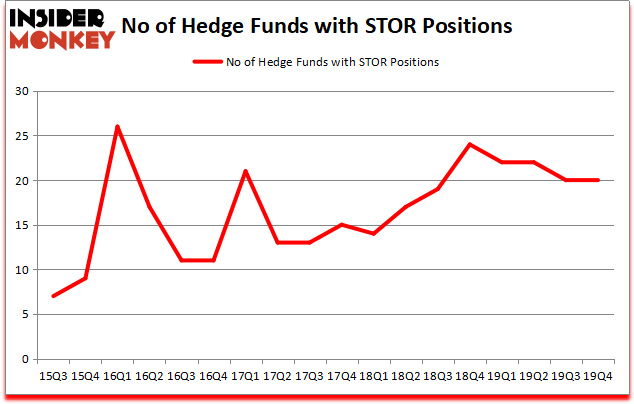 According to publicly available hedge fund and institutional investor holdings data compiled by Insider Monkey, Berkshire Hathaway, managed by Warren Buffett, holds the most valuable position in Store Capital Corporation (NYSE:STOR). Berkshire Hathaway has a $693.5 million position in the stock, comprising 0.3% of its 13F portfolio. The second largest stake is held by Ken Griffin of Citadel Investment Group, with a $83.1 million position; the fund has less than 0.1%% of its 13F portfolio invested in the stock. Some other professional money managers with similar optimism encompass Renaissance Technologies, John Overdeck and David Siegel’s Two Sigma Advisors and Douglas Braunstein and James Woolery’s Hudson Executive Capital. In terms of the portfolio weights assigned to each position Claar Advisors allocated the biggest weight to Store Capital Corporation (NYSE:STOR), around 3.16% of its 13F portfolio. Hudson Executive Capital is also relatively very bullish on the stock, designating 2.95 percent of its 13F equity portfolio to STOR.

Seeing as Store Capital Corporation (NYSE:STOR) has witnessed declining sentiment from the smart money, logic holds that there were a few fund managers that decided to sell off their full holdings heading into Q4. Intriguingly, Daniel Johnson’s Gillson Capital said goodbye to the biggest stake of the “upper crust” of funds monitored by Insider Monkey, totaling an estimated $3.9 million in stock. Perella Weinberg Partners, also sold off its stock, about $0.6 million worth. These moves are intriguing to say the least, as total hedge fund interest stayed the same (this is a bearish signal in our experience).

Let’s also examine hedge fund activity in other stocks – not necessarily in the same industry as Store Capital Corporation (NYSE:STOR) but similarly valued. We will take a look at James Hardie Industries plc (NYSE:JHX), Athene Holding Ltd. (NYSE:ATH), Graco Inc. (NYSE:GGG), and Under Armour Inc (NYSE:UA). All of these stocks’ market caps are closest to STOR’s market cap.

As you can see these stocks had an average of 22.75 hedge funds with bullish positions and the average amount invested in these stocks was $657 million. That figure was $957 million in STOR’s case. Athene Holding Ltd. (NYSE:ATH) is the most popular stock in this table. On the other hand James Hardie Industries plc (NYSE:JHX) is the least popular one with only 3 bullish hedge fund positions. Store Capital Corporation (NYSE:STOR) is not the least popular stock in this group but hedge fund interest is still below average. This is a slightly negative signal and we’d rather spend our time researching stocks that hedge funds are piling on. Our calculations showed that top 20 most popular stocks among hedge funds returned 41.3% in 2019 and outperformed the S&P 500 ETF (SPY) by 10.1 percentage points. These stocks lost 22.3% in 2020 through March 16th but beat the market by 3.2 percentage points. Unfortunately STOR wasn’t nearly as popular as these 20 stocks (hedge fund sentiment was quite bearish); STOR investors were disappointed as the stock returned -50.6% during the same time period and underperformed the market. If you are interested in investing in large cap stocks with huge upside potential, you should check out the top 20 most popular stocks among hedge funds as most of these stocks already outperformed the market in Q1.