Our extensive research has shown that imitating the smart money can generate significant returns for retail investors, which is why we track nearly 750 active prominent money managers and analyze their quarterly 13F filings. The stocks that are heavily bought by hedge funds historically outperformed the market, though there is no shortage of high profile failures like hedge funds’ 2018 losses in Facebook and Apple. Let’s take a closer look at what the funds we track think about Store Capital Corporation (NYSE:STOR) in this article.

Store Capital Corporation (NYSE:STOR) shares haven’t seen a lot of action during the second quarter. Overall, hedge fund sentiment was unchanged. The stock was in 22 hedge funds’ portfolios at the end of the second quarter of 2019. At the end of this article we will also compare STOR to other stocks including Alliance Data Systems Corporation (NYSE:ADS), Telecom Argentina S.A. (NYSE:TEO), and Neurocrine Biosciences, Inc. (NASDAQ:NBIX) to get a better sense of its popularity. Our calculations also showed that STOR isn’t among the 30 most popular stocks among hedge funds (see the video below). 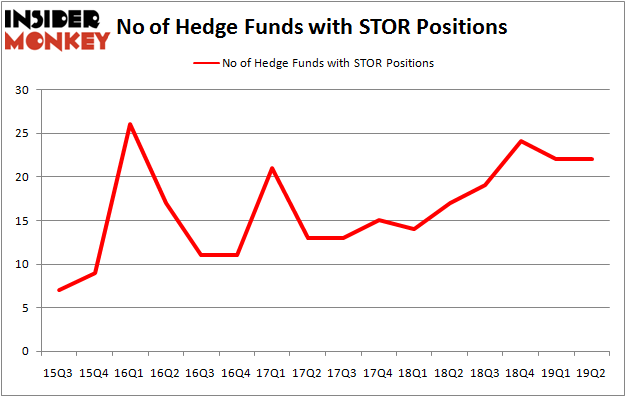 Unlike this former hedge fund manager who is convinced Dow will soar past 40000, our long-short investment strategy doesn’t rely on bull markets to deliver double digit returns. We only rely on hedge fund buy/sell signals. We’re going to view the key hedge fund action regarding Store Capital Corporation (NYSE:STOR).

More specifically, Berkshire Hathaway was the largest shareholder of Store Capital Corporation (NYSE:STOR), with a stake worth $618.1 million reported as of the end of March. Trailing Berkshire Hathaway was AEW Capital Management, which amassed a stake valued at $96.1 million. Millennium Management, Citadel Investment Group, and Two Sigma Advisors were also very fond of the stock, giving the stock large weights in their portfolios.

Due to the fact that Store Capital Corporation (NYSE:STOR) has witnessed falling interest from the entirety of the hedge funds we track, we can see that there is a sect of fund managers that decided to sell off their positions entirely heading into Q3. Intriguingly, David Costen Haley’s HBK Investments dumped the largest investment of all the hedgies followed by Insider Monkey, valued at an estimated $1.3 million in stock. Michael Platt and William Reeves’s fund, BlueCrest Capital Mgmt., also said goodbye to its stock, about $0.8 million worth. These transactions are intriguing to say the least, as aggregate hedge fund interest stayed the same (this is a bearish signal in our experience).

As you can see these stocks had an average of 25 hedge funds with bullish positions and the average amount invested in these stocks was $815 million. That figure was $988 million in STOR’s case. Alliance Data Systems Corporation (NYSE:ADS) is the most popular stock in this table. On the other hand Telecom Argentina S.A. (NYSE:TEO) is the least popular one with only 3 bullish hedge fund positions. Store Capital Corporation (NYSE:STOR) is not the least popular stock in this group but hedge fund interest is still below average. Our calculations showed that top 20 most popular stocks among hedge funds returned 24.4% in 2019 through September 30th and outperformed the S&P 500 ETF (SPY) by 4 percentage points. A small number of hedge funds were also right about betting on STOR as the stock returned 13.8% during the same time frame and outperformed the market by an even larger margin.