Hedge fund managers like David Einhorn, Dan Loeb, or Carl Icahn became billionaires through reaping large profits for their investors, which is why piggybacking their stock picks may provide us with significant returns as well. Many hedge funds, like Paul Singer’s Elliott Management, are pretty secretive, but we can still get some insights by analyzing their quarterly 13F filings. One of the most fertile grounds for large abnormal returns is hedge funds’ most popular small-cap picks, which are not so widely followed and often trade at a discount to their intrinsic value. In this article we will check out hedge fund activity in another small-cap stock: Store Capital Corporation (NYSE:STOR).

Is Store Capital Corporation (NYSE:STOR) worth your attention right now? Investors who are in the know are turning bullish. The number of bullish hedge fund bets moved up by 2 recently. Our calculations also showed that STOR isn’t among the 30 most popular stocks among hedge funds. STOR was in 19 hedge funds’ portfolios at the end of the third quarter of 2018. There were 17 hedge funds in our database with STOR holdings at the end of the previous quarter.

In the eyes of most market participants, hedge funds are viewed as unimportant, outdated financial vehicles of the past. While there are greater than 8000 funds trading at present, Our researchers choose to focus on the masters of this club, around 700 funds. It is estimated that this group of investors manage the lion’s share of all hedge funds’ total asset base, and by following their matchless stock picks, Insider Monkey has unsheathed a few investment strategies that have historically outperformed the broader indices. Insider Monkey’s flagship hedge fund strategy outrun the S&P 500 index by 6 percentage points annually since its inception in May 2014 through early November 2018. We were able to generate large returns even by identifying short candidates. Our portfolio of short stocks lost 24% since February 2017 (through December 3rd) even though the market was up nearly 23% during the same period. We just shared a list of 11 short targets in our latest quarterly update.

What does the smart money think about Store Capital Corporation (NYSE:STOR)?

At Q3’s end, a total of 19 of the hedge funds tracked by Insider Monkey held long positions in this stock, a change of 12% from one quarter earlier. Below, you can check out the change in hedge fund sentiment towards STOR over the last 13 quarters. With hedge funds’ sentiment swirling, there exists a few noteworthy hedge fund managers who were adding to their holdings substantially (or already accumulated large positions). 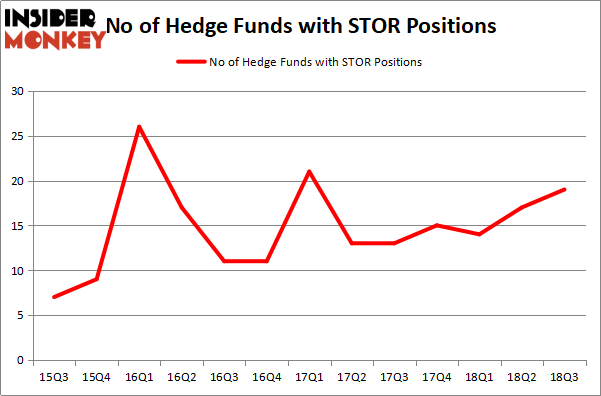 When looking at the institutional investors followed by Insider Monkey, Berkshire Hathaway, managed by Warren Buffett, holds the biggest position in Store Capital Corporation (NYSE:STOR). Berkshire Hathaway has a $517.5 million position in the stock, comprising 0.2% of its 13F portfolio. Coming in second is AEW Capital Management, managed by Jeffrey Furber, which holds a $58 million position; 1.6% of its 13F portfolio is allocated to the company. Remaining members of the smart money that are bullish contain Jim Simons’s Renaissance Technologies, Douglas Braunstein and James Wooleryá’s Hudson Executive Capital and John Overdeck and David Siegel’s Two Sigma Advisors.

As aggregate interest increased, some big names were breaking ground themselves. Carlson Capital, managed by Clint Carlson, assembled the most outsized position in Store Capital Corporation (NYSE:STOR). Carlson Capital had $17.2 million invested in the company at the end of the quarter. David Costen Haley’s HBK Investments also made a $0.5 million investment in the stock during the quarter. The other funds with new positions in the stock are Louis Navellier’s Navellier & Associates, George Zweig, Shane Haas and Ravi Chander’s Signition LP, and Alec Litowitz and Ross Laser’s Magnetar Capital.

As you can see these stocks had an average of 13.25 hedge funds with bullish positions and the average amount invested in these stocks was $291 million. That figure was $721 million in STOR’s case. LPL Financial Holdings Inc (NASDAQ:LPLA) is the most popular stock in this table. On the other hand Enel Generacion Chile S.A. (NYSE:EOCC) is the least popular one with only 3 bullish hedge fund positions. Store Capital Corporation (NYSE:STOR) is not the most popular stock in this group but hedge fund interest is still above average. This is a slightly positive signal but we’d rather spend our time researching stocks that hedge funds are piling on. In this regard LPLA might be a better candidate to consider a long position.