It was a rough fourth quarter for many hedge funds, which were naturally unable to overcome the big dip in the broad market, as the S&P 500 fell by about 4.8% during 2018 and average hedge fund losing about 1%. The Russell 2000, composed of smaller companies, performed even worse, trailing the S&P by more than 6 percentage points, as investors fled less-known quantities for safe havens. Luckily hedge funds were shifting their holdings into large-cap stocks. The 20 most popular hedge fund stocks actually generated an average return of 24.4% during the first 9 months of 2019 and outperformed the S&P 500 ETF by 4 percentage points. We are done processing the latest 13f filings and in this article we will study how hedge fund sentiment towards nVent Electric plc (NYSE:NVT) changed during the first quarter.

nVent Electric plc (NYSE:NVT) has seen an increase in hedge fund sentiment lately. NVT was in 28 hedge funds’ portfolios at the end of the second quarter of 2019. There were 25 hedge funds in our database with NVT positions at the end of the previous quarter. Our calculations also showed that NVT isn’t among the 30 most popular stocks among hedge funds (view the video below).

What does smart money think about nVent Electric plc (NYSE:NVT)?

Heading into the third quarter of 2019, a total of 28 of the hedge funds tracked by Insider Monkey were bullish on this stock, a change of 12% from the previous quarter. The graph below displays the number of hedge funds with bullish position in NVT over the last 16 quarters. So, let’s check out which hedge funds were among the top holders of the stock and which hedge funds were making big moves. 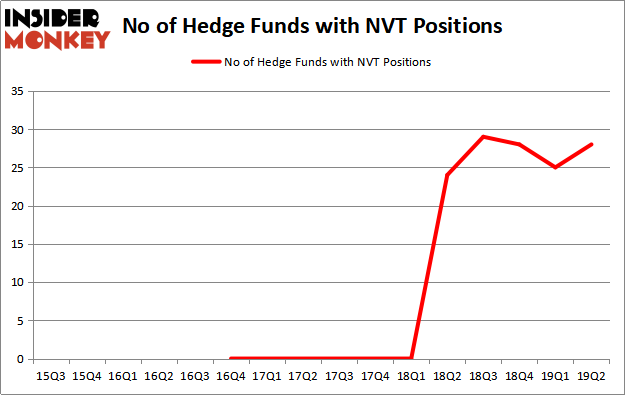 The largest stake in nVent Electric plc (NYSE:NVT) was held by Trian Partners, which reported holding $336 million worth of stock at the end of March. It was followed by Iridian Asset Management with a $98 million position. Other investors bullish on the company included Glenview Capital, AQR Capital Management, and Balyasny Asset Management.