While the market driven by short-term sentiment influenced by uncertainty regarding the future of the interest rate environment in the US, declining oil prices and the trade war with China, many smart money investors kept their optimism regarding the current bull run in the fourth quarter, while still hedging many of their long positions. However, as we know, big investors usually buy stocks with strong fundamentals, which is why we believe we can profit from imitating them. In this article, we are going to take a look at the smart money sentiment surrounding nVent Electric plc (NYSE:NVT).

Is nVent Electric plc (NYSE:NVT) a buy right now? Investors who are in the know are taking a bearish view. The number of long hedge fund bets decreased by 1 in recent months. Our calculations also showed that NVT isn’t among the 30 most popular stocks among hedge funds. NVT was in 28 hedge funds’ portfolios at the end of December. There were 29 hedge funds in our database with NVT holdings at the end of the previous quarter.

Today there are several gauges shareholders can use to assess stocks. A pair of the less known gauges are hedge fund and insider trading signals. We have shown that, historically, those who follow the top picks of the best money managers can trounce the S&P 500 by a very impressive margin (see the details here). 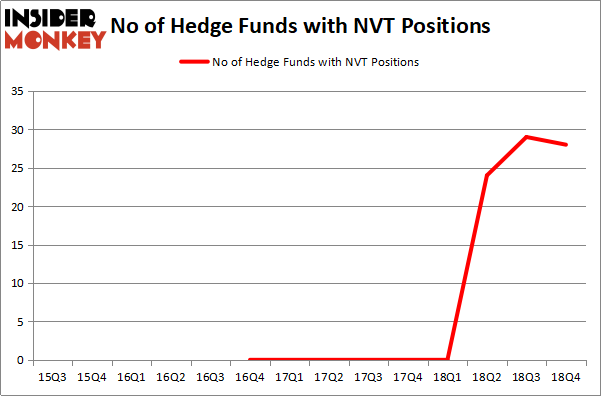 According to publicly available hedge fund and institutional investor holdings data compiled by Insider Monkey, Trian Partners, managed by Nelson Peltz, holds the number one position in nVent Electric plc (NYSE:NVT). Trian Partners has a $394.5 million position in the stock, comprising 4.3% of its 13F portfolio. The second most bullish fund manager is Larry Robbins of Glenview Capital, with a $149.5 million position; 1.4% of its 13F portfolio is allocated to the company. Remaining peers that are bullish consist of David Cohen and Harold Levy’s Iridian Asset Management, Phill Gross and Robert Atchinson’s Adage Capital Management and James Dinan’s York Capital Management.

Seeing as nVent Electric plc (NYSE:NVT) has witnessed falling interest from the entirety of the hedge funds we track, logic holds that there were a few funds that slashed their positions entirely in the third quarter. Interestingly, David Harding’s Winton Capital Management said goodbye to the largest stake of all the hedgies followed by Insider Monkey, valued at about $12.9 million in stock, and Malcolm Fairbairn’s Ascend Capital was right behind this move, as the fund dumped about $9.5 million worth. These moves are important to note, as aggregate hedge fund interest dropped by 1 funds in the third quarter.

As you can see these stocks had an average of 22.5 hedge funds with bullish positions and the average amount invested in these stocks was $414 million. That figure was $1016 million in NVT’s case. Brunswick Corporation (NYSE:BC) is the most popular stock in this table. On the other hand Janus Henderson Group plc (NYSE:JHG) is the least popular one with only 15 bullish hedge fund positions. Compared to these stocks nVent Electric plc (NYSE:NVT) is more popular among hedge funds. Our calculations showed that top 15 most popular stocks) among hedge funds returned 24.2% through April 22nd and outperformed the S&P 500 ETF (SPY) by more than 7 percentage points. Hedge funds were also right about betting on NVT as the stock returned 26.4% and outperformed the market by an even larger margin. Hedge funds were clearly right about piling into this stock relative to other stocks with similar market capitalizations.