The elite funds run by legendary investors such as Dan Loeb and David Tepper make hundreds of millions of dollars for themselves and their investors by spending enormous resources doing research on small cap stocks that big investment banks don’t follow. Because of their pay structures, they have strong incentive to do the research necessary to beat the market. That’s why we pay close attention to what they think in small cap stocks. In this article, we take a closer look at nVent Electric plc (NYSE:NVT) from the perspective of those elite funds.

Is nVent Electric plc (NYSE:NVT) a superb investment today? Investors who are in the know are taking a bullish view. The number of long hedge fund bets went up by 5 in recent months. Our calculations also showed that nvt isn’t among the 30 most popular stocks among hedge funds.

What have hedge funds been doing with nVent Electric plc (NYSE:NVT)? 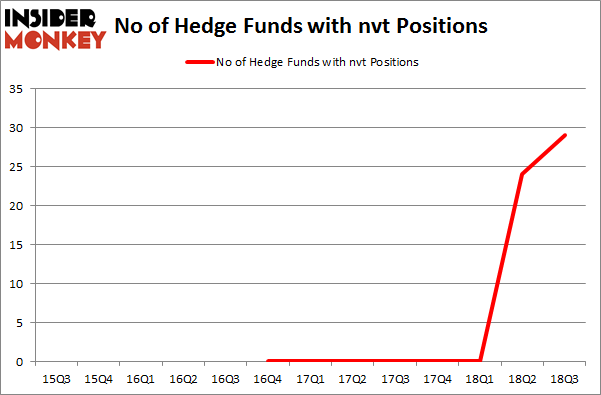 When looking at the institutional investors followed by Insider Monkey, Nelson Peltz’s Trian Partners has the largest position in nVent Electric plc (NYSE:NVT), worth close to $477 million, corresponding to 4.6% of its total 13F portfolio. On Trian Partners’s heels is Iridian Asset Management, managed by David Cohen and Harold Levy, which holds a $169.4 million position; 1.7% of its 13F portfolio is allocated to the company. Remaining members of the smart money that hold long positions comprise Larry Robbins’s Glenview Capital, Phill Gross and Robert Atchinson’s Adage Capital Management and James Dinan’s York Capital Management.

With a general bullishness amongst the heavyweights, key hedge funds have been driving this bullishness. Ascend Capital, managed by Malcolm Fairbairn, initiated the biggest position in nVent Electric plc (NYSE:NVT). Ascend Capital had $9.5 million invested in the company at the end of the quarter. Clint Carlson’s Carlson Capital also initiated a $8.1 million position during the quarter. The following funds were also among the new NVT investors: Gregg Moskowitz’s Interval Partners, John Burbank’s Passport Capital, and Ian Simm’s Impax Asset Management.

Let’s go over hedge fund activity in other stocks – not necessarily in the same industry as nVent Electric plc (NYSE:NVT) but similarly valued. We will take a look at SLM Corp (NASDAQ:SLM), Prosperity Bancshares, Inc. (NYSE:PB), Amarin Corporation plc (NASDAQ:AMRN), and Axis Capital Holdings Limited (NYSE:AXS). All of these stocks’ market caps are closest to NVT’s market cap.

As you can see these stocks had an average of 17 hedge funds with bullish positions and the average amount invested in these stocks was $605 million. That figure was $1.21 billion in NVT’s case. Amarin Corporation plc (NASDAQ:AMRN) is the most popular stock in this table. On the other hand Prosperity Bancshares, Inc. (NYSE:PB) is the least popular one with only 6 bullish hedge fund positions. Compared to these stocks nVent Electric plc (NYSE:NVT) is more popular among hedge funds. Considering that hedge funds are fond of this stock in relation to its market cap peers, it may be a good idea to analyze it in detail and potentially include it in your portfolio.