Before we spend countless hours researching a company, we’d like to analyze what insiders, hedge funds and billionaire investors think of the stock first. This is a necessary first step in our investment process because our research has shown that the elite investors’ consensus returns have been exceptional. In the following paragraphs, we find out what the billionaire investors and hedge funds think of Black Hills Corporation (NYSE:BKH).

Black Hills Corporation (NYSE:BKH) was in 18 hedge funds’ portfolios at the end of March. BKH has experienced an increase in support from the world’s most elite money managers lately. There were 17 hedge funds in our database with BKH positions at the end of the previous quarter. Our calculations also showed that bkh isn’t among the 30 most popular stocks among hedge funds.

What does the smart money think about Black Hills Corporation (NYSE:BKH)?

At the end of the first quarter, a total of 18 of the hedge funds tracked by Insider Monkey were long this stock, a change of 6% from the fourth quarter of 2018. Below, you can check out the change in hedge fund sentiment towards BKH over the last 15 quarters. With the smart money’s sentiment swirling, there exists an “upper tier” of noteworthy hedge fund managers who were boosting their stakes significantly (or already accumulated large positions). 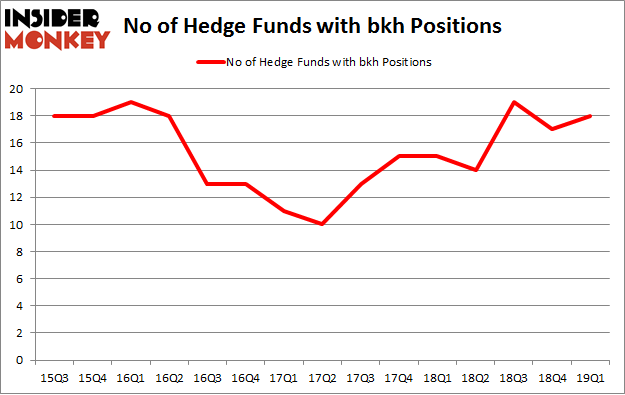 The largest stake in Black Hills Corporation (NYSE:BKH) was held by Renaissance Technologies, which reported holding $63.1 million worth of stock at the end of March. It was followed by GAMCO Investors with a $22.3 million position. Other investors bullish on the company included GLG Partners, Shelter Harbor Advisors, and AQR Capital Management.

As you can see these stocks had an average of 20.25 hedge funds with bullish positions and the average amount invested in these stocks was $365 million. That figure was $136 million in BKH’s case. Williams-Sonoma, Inc. (NYSE:WSM) is the most popular stock in this table. On the other hand Hawaiian Electric Industries, Inc. (NYSE:HE) is the least popular one with only 12 bullish hedge fund positions. Black Hills Corporation (NYSE:BKH) is not the least popular stock in this group but hedge fund interest is still below average. Our calculations showed that top 20 most popular stocks among hedge funds returned 1.9% in Q2 through May 30th and outperformed the S&P 500 ETF (SPY) by more than 3 percentage points. A small number of hedge funds were also right about betting on BKH, though not to the same extent, as the stock returned 1.7% during the same time frame and outperformed the market as well.