Adage Capital Has $88.8 Million Invested in This Energy Stock

Does Black Hills Corp (NYSE:BKH) represent a good buying opportunity at the moment? Let’s briefly check the hedge fund interest towards the company. Hedge fund firms constantly search out bright intellectuals and highly-experienced employees and invest millions of dollars on research activities, so it is no wonder they tend to generate millions in profits each year. It is also true that some hedge fund players fail inconceivably on some occasions, but their stock picks have been generating superior risk-adjusted returns on average over the years.

Hedge fund ownership of Black Hills Corp (NYSE:BKH) dipped slightly in Q2 after having leveled off in Q1. For now at least, it appears the energy company hasn’t done enough to convince other leading money managers to buy into the stock, despite its impressive dividend track record. The company has paid out dividends for 48 straight years, which landed it in 4th position on our list of the 25 Best Dividend Stocks for Retirement.

To the average investor there are dozens of methods market participants employ to size up their stock investments. Some of the most useful methods are hedge fund and insider trading moves. Our researchers have shown that, historically, those who follow the top picks of the top hedge fund managers can outpace their index-focused peers by a healthy margin (see the details here).

What does the smart money think about Black Hills Corp (NYSE:BKH)?

At the end of the third quarter, a total of 14 of the hedge funds tracked by Insider Monkey were bullish on this stock, a 7% decline from the second quarter of 2018. The graph below displays the number of hedge funds with bullish position in BKH over the last 6 quarters. With hedgies’ capital changing hands, there exists a select group of noteworthy hedge fund managers who were increasing their stakes significantly (or already accumulated large positions). 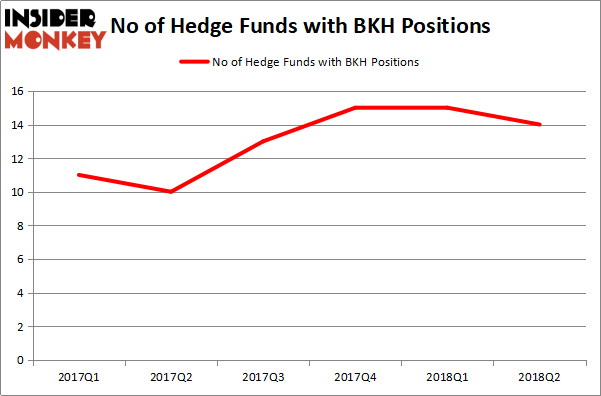 The largest stake in Black Hills Corp (NYSE:BKH) was held by Phill Gross and Robert Atchinson’s Adage Capital Management, which reported holding $88.8 million worth of stock as of the end of June. It was followed by D E Shaw with a $52.9 million position. Other investors bullish on the company included Angelo Gordon & Co, GAMCO Investors,and Balyasny Asset Management.

Judging by the fact that Black Hills Corp (NYSE:BKH) has faced a decline in interest from the aggregate hedge fund industry, it’s safe to say that there was a specific group of hedge funds that decided to sell off their full holdings heading into Q3. At the top of the heap, Michael Platt and William Reeves’ BlueCrest Capital Mgmt. cut the biggest investment of the “upper crust” of funds watched by Insider Monkey, comprising an estimated $3.9 million in stock, and Daniel Arbess’ Perella Weinberg Partners was right behind this move, as the fund dropped about $0.4 million worth. These transactions are intriguing to say the least, as total hedge fund interest fell by 1 fund heading into Q3.

As you can see these stocks had an average of 23 hedge funds with bullish positions and the average amount invested in these stocks was $653 million. That figure was $243 million in BKH’s case. Weatherford International Ltd (NYSE:WFT) is the most popular stock in this table. On the other hand Kosmos Energy Ltd (NYSE:KOS) is the least popular one with only 15 bullish hedge fund positions. Compared to these stocks Black Hills Corp (NYSE:BKH) is even less popular than KOS. Considering that hedge funds aren’t fond of this stock in relation to other companies analyzed in this article and don’t seem to view it as undervalued, this may be one for dividend investors only.