Here is What Hedge Funds Think About U.S. Bancorp (USB)

We at Insider Monkey have gone over 730 13F filings that hedge funds and prominent investors are required to file by the SEC The 13F filings show the funds’ and investors’ portfolio positions as of June 28th. In this article, we look at what those funds think of U.S. Bancorp (NYSE:USB) based on that data.

U.S. Bancorp (NYSE:USB) has seen a decrease in support from the world’s most elite money managers in recent months. USB was in 39 hedge funds’ portfolios at the end of the second quarter of 2019. There were 44 hedge funds in our database with USB positions at the end of the previous quarter. Our calculations also showed that USB isn’t among the 30 most popular stocks among hedge funds (see the video below).

Unlike some fund managers who are betting on Dow reaching 40000 in a year, our long-short investment strategy doesn’t rely on bull markets to deliver double digit returns. We only rely on hedge fund buy/sell signals. Let’s check out the recent hedge fund action surrounding U.S. Bancorp (NYSE:USB).

How have hedgies been trading U.S. Bancorp (NYSE:USB)? 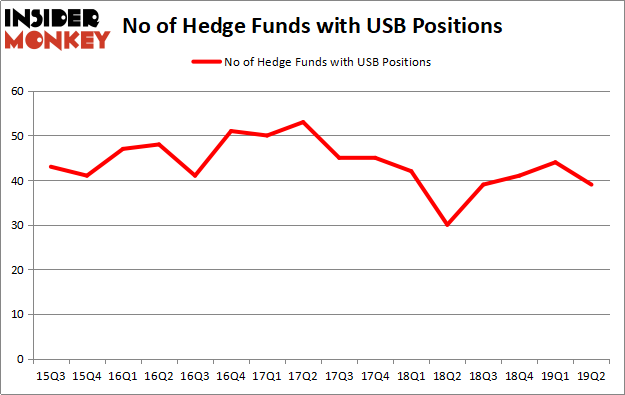 According to Insider Monkey’s hedge fund database, Warren Buffett’s Berkshire Hathaway has the most valuable position in U.S. Bancorp (NYSE:USB), worth close to $6.9409 billion, amounting to 3.3% of its total 13F portfolio. Sitting at the No. 2 spot is Yacktman Asset Management, led by Donald Yacktman, holding a $248.8 million position; 3% of its 13F portfolio is allocated to the stock. Other hedge funds and institutional investors that are bullish encompass Peter Rathjens, Bruce Clarke and John Campbell’s Arrowstreet Capital, Dmitry Balyasny’s Balyasny Asset Management and Cliff Asness’s AQR Capital Management.

Due to the fact that U.S. Bancorp (NYSE:USB) has experienced declining sentiment from the entirety of the hedge funds we track, it’s safe to say that there was a specific group of funds that slashed their positions entirely in the second quarter. Intriguingly, Benjamin A. Smith’s Laurion Capital Management dropped the largest stake of the “upper crust” of funds watched by Insider Monkey, totaling about $12.8 million in stock. James Dondero’s fund, Highland Capital Management, also cut its stock, about $3.2 million worth. These transactions are interesting, as total hedge fund interest dropped by 5 funds in the second quarter.

As you can see these stocks had an average of 38.75 hedge funds with bullish positions and the average amount invested in these stocks was $2458 million. That figure was $7777 million in USB’s case. Booking Holdings Inc. (NASDAQ:BKNG) is the most popular stock in this table. On the other hand British American Tobacco plc (NYSEAMEX:BTI) is the least popular one with only 9 bullish hedge fund positions. U.S. Bancorp (NYSE:USB) is not the most popular stock in this group but hedge fund interest is still above average. Our calculations showed that top 20 most popular stocks among hedge funds returned 24.4% in 2019 through September 30th and outperformed the S&P 500 ETF (SPY) by 4 percentage points. Hedge funds were also right about betting on USB as the stock returned 6.4% during the third quarter and outperformed the market. Hedge funds were rewarded for their relative bullishness.