Were Hedge Funds Right About Flocking Into U.S. Bancorp (USB) ?

U.S. Bancorp (NYSE:USB) investors should be aware of an increase in hedge fund interest recently. USB was in 44 hedge funds’ portfolios at the end of the first quarter of 2019. There were 41 hedge funds in our database with USB holdings at the end of the previous quarter. Our calculations also showed that USB isn’t among the 30 most popular stocks among hedge funds.

In the financial world there are a multitude of methods investors can use to analyze publicly traded companies. Two of the most under-the-radar methods are hedge fund and insider trading sentiment. We have shown that, historically, those who follow the best picks of the top investment managers can outperform their index-focused peers by a healthy amount (see the details here).

What have hedge funds been doing with U.S. Bancorp (NYSE:USB)?

At the end of the first quarter, a total of 44 of the hedge funds tracked by Insider Monkey were bullish on this stock, a change of 7% from the fourth quarter of 2018. By comparison, 42 hedge funds held shares or bullish call options in USB a year ago. With hedgies’ sentiment swirling, there exists an “upper tier” of noteworthy hedge fund managers who were increasing their stakes meaningfully (or already accumulated large positions). 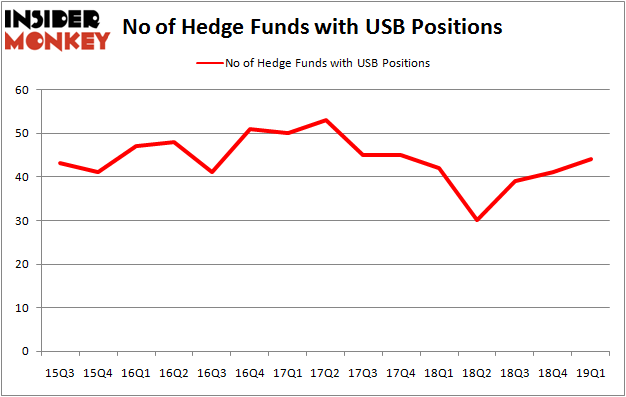 Among these funds, Berkshire Hathaway held the most valuable stake in U.S. Bancorp (NYSE:USB), which was worth $6231.4 million at the end of the first quarter. On the second spot was Yacktman Asset Management which amassed $228 million worth of shares. Moreover, Renaissance Technologies, Balyasny Asset Management, and AQR Capital Management were also bullish on U.S. Bancorp (NYSE:USB), allocating a large percentage of their portfolios to this stock.

As you can see these stocks had an average of 29 hedge funds with bullish positions and the average amount invested in these stocks was $1301 million. That figure was $6941 million in USB’s case. ConocoPhillips (NYSE:COP) is the most popular stock in this table. On the other hand China Life Insurance Company Ltd. (NYSE:LFC) is the least popular one with only 7 bullish hedge fund positions. U.S. Bancorp (NYSE:USB) is not the most popular stock in this group but hedge fund interest is still above average. Our calculations showed that top 20 most popular stocks among hedge funds returned 1.9% in Q2 through May 30th and outperformed the S&P 500 ETF (SPY) by more than 3 percentage points. Hedge funds were also right about betting on USB as the stock returned 4.6% during the same period and outperformed the market by an even larger margin. Hedge funds were rewarded for their relative bullishness.