Were Hedge Funds Right About Betting On U.S. Bancorp (USB)?

How do we determine whether U.S. Bancorp (NYSE:USB) makes for a good investment at the moment? We analyze the sentiment of a select group of the very best investors in the world, who spend immense amounts of time and resources studying companies. They may not always be right (no one is), but data shows that their consensus long positions have historically outperformed the market when we adjust for known risk factors.

U.S. Bancorp (NYSE:USB) investors should pay attention to an increase in support from the world’s most elite money managers recently. USB was in 41 hedge funds’ portfolios at the end of December. There were 39 hedge funds in our database with USB positions at the end of September. Our calculations also showed that USB isn’t among the 30 most popular stocks among hedge funds.

What have hedge funds been doing with U.S. Bancorp (NYSE:USB)? 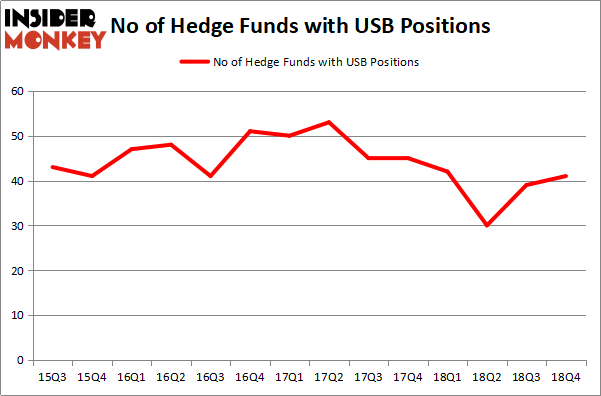 Among these funds, Berkshire Hathaway held the most valuable stake in U.S. Bancorp (NYSE:USB), which was worth $5909.4 million at the end of the third quarter. On the second spot was Yacktman Asset Management which amassed $215.8 million worth of shares. Moreover, Balyasny Asset Management, AQR Capital Management, and Basswood Capital were also bullish on U.S. Bancorp (NYSE:USB), allocating a large percentage of their portfolios to this stock.

With a general bullishness amongst the heavyweights, key money managers have been driving this bullishness. Renaissance Technologies, managed by Jim Simons, assembled the most outsized position in U.S. Bancorp (NYSE:USB). Renaissance Technologies had $18.1 million invested in the company at the end of the quarter. Nick Niell’s Arrowgrass Capital Partners also made a $9.1 million investment in the stock during the quarter. The other funds with brand new USB positions are Sander Gerber’s Hudson Bay Capital Management, Matthew Hulsizer’s PEAK6 Capital Management, and James Dondero’s Highland Capital Management.

As you can see these stocks had an average of 36 hedge funds with bullish positions and the average amount invested in these stocks was $1894 million. That figure was $6539 million in USB’s case. CIGNA Corporation (NYSE:CI) is the most popular stock in this table. On the other hand British American Tobacco plc (NYSEAMEX:BTI) is the least popular one with only 10 bullish hedge fund positions. U.S. Bancorp (NYSE:USB) is not the most popular stock in this group but hedge fund interest is still above average. Our calculations showed that top 15 most popular stocks among hedge funds returned 19.7% through March 15th and outperformed the S&P 500 ETF (SPY) by 6.6 percentage points. Hedge funds were also right about betting on Microsoft as the stock returned 13.9% and outperformed the market as well.