We can judge whether Charles Schwab Corp (NYSE:SCHW) is a good investment right now by following the lead of some of the best investors in the world and piggybacking their ideas. There’s no better way to get these firms’ immense resources and analytical capabilities working for us than to follow their lead into their best ideas. While not all of these picks will be winners, research shows that these picks historically outperformed the market when we factor in known risk factors.

Charles Schwab Corp (NYSE:SCHW) investors should be aware of an increase in enthusiasm from smart money lately. SCHW was in 53 hedge funds’ portfolios at the end of the third quarter of 2018. There were 40 hedge funds in our database with SCHW positions at the end of the previous quarter. Our calculations also showed that SCHW isn’t among the 30 most popular stocks among hedge funds. 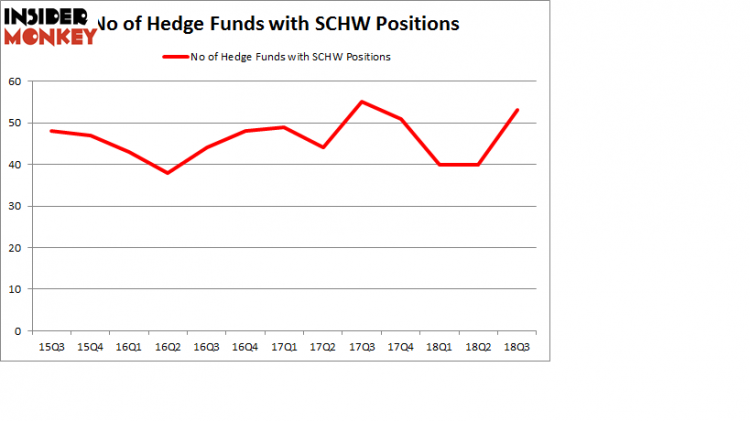 The largest stake in Charles Schwab Corp (NYSE:SCHW) was held by Generation Investment Management, which reported holding $568.7 million worth of stock at the end of September. It was followed by Theleme Partners with a $509.7 million position. Other investors bullish on the company included Egerton Capital Limited, SPO Advisory Corp, and Brave Warrior Capital.

With a general bullishness amongst the heavyweights, some big names were leading the bulls’ herd. Wallace R. Weitz & Co., managed by Wallace Weitz, initiated the most valuable position in Charles Schwab Corp (NYSE:SCHW). Wallace R. Weitz & Co. had $41.2 million invested in the company at the end of the quarter. James Parsons’s Junto Capital Management also initiated a $40.8 million position during the quarter. The other funds with brand new SCHW positions are Francois Rochon’s Giverny Capital, Greg Poole’s Echo Street Capital Management, and Malcolm Fairbairn’s Ascend Capital.

As you can see these stocks had an average of 28 hedge funds with bullish positions and the average amount invested in these stocks was $2.23 billion. That figure was $3.52 billion in SCHW’s case. Intuitive Surgical, Inc. (NASDAQ:ISRG) is the most popular stock in this table. On the other hand Banco Santander (Brasil) SA (NYSE:BSBR) is the least popular one with only 7 bullish hedge fund positions. Compared to these stocks Charles Schwab Corp (NYSE:SCHW) is more popular among hedge funds. Considering that hedge funds are fond of this stock in relation to its market cap peers, it may be a good idea to analyze it in detail and potentially include it in your portfolio.