Here is the 30th Most Popular Stocks Among 752 Hedge Funds

The 750+ hedge funds and famous money managers tracked by Insider Monkey have already compiled and submitted their 13F filings for the third quarter, which unveil their equity positions as of September 30. We went through these filings, fixed typos and other more significant errors and identified the changes in hedge fund portfolios. Our extensive review of these public filings is finally over, so this article is set to reveal the smart money sentiment towards Goldman Sachs Group, Inc. (NYSE:GS), Chubb Limited (NYSE:CB), Sony Corporation (NYSE:SNE), Ambev SA (NYSE:ABEV), and The Estee Lauder Companies Inc (NYSE:EL).

How have hedgies been trading Goldman Sachs Group, Inc. (NYSE:GS)? 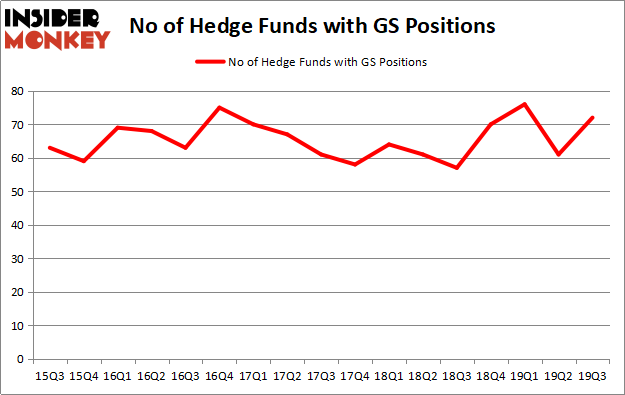 The largest stake in Goldman Sachs Group, Inc. (NYSE:GS) was held by Berkshire Hathaway, which reported holding $3803.4 million worth of stock at the end of September. It was followed by Eagle Capital Management with a $1448.4 million position. Other investors bullish on the company included Greenhaven Associates, Citadel Investment Group, and Pzena Investment Management. In terms of the portfolio weights assigned to each position Okumus Fund Management allocated the biggest weight to Goldman Sachs Group, Inc. (NYSE:GS), around 18.54% of its portfolio. Greenhaven Associates is also relatively very bullish on the stock, designating 14.02 percent of its 13F equity portfolio to GS.

As you can see these stocks had an average of 28.25 hedge funds with bullish positions and the average amount invested in these stocks was $908 million. That figure was $8237 million in GS’s case. The Estee Lauder Companies Inc (NYSE:EL) is the most popular stock in this table. On the other hand Ambev SA (NYSE:ABEV) is the least popular one with only 18 bullish hedge fund positions. Compared to these stocks Goldman Sachs Group, Inc. (NYSE:GS) is more popular among hedge funds. Our calculations showed that top 20 most popular stocks among hedge funds returned 34.7% in 2019 through November 22nd and outperformed the S&P 500 ETF (SPY) by 8.5 percentage points. Hedge funds were also right about betting on GS, though not to the same extent, as the stock returned 6.3% during the fourth quarter (through 11/22) and outperformed the market as well.