Hedge Funds Haven’t Been This Bullish On DexCom, Inc. (DXCM) Since 2015

Is DexCom, Inc. (NASDAQ:DXCM) the right pick for your portfolio? The best stock pickers are in a bullish mood. The number of long hedge fund positions advanced by 1 lately. Hedge fund sentiment towards DXCM is at its highest level since 2015. This is usually a bullish indicator. For example hedge fund sentiment in Xilinx Inc. (XLNX) was also at its all time high at the beginning of this year and the stock returned more than 46% in 2.5 months. We observed a similar performance from Progressive Corporation (PGR) which returned 27% and MSCI which returned 29%. Both stocks outperformed the S&P 500 Index by 14 and 16 percentage points respectively. Hedge fund sentiment towards IQVIA Holdings Inc. (IQV), Brookfield Asset Management Inc. (BAM), Atlassian Corporation Plc (TEAM), RCL, MTB and CRH hit all time highs at the end of December, and all of these stocks returned more than 20% in the first 2.5 months of this year.

At the end of the fourth quarter, a total of 31 of the hedge funds tracked by Insider Monkey were long this stock, a change of 3% from one quarter earlier. Below, you can check out the change in hedge fund sentiment towards DXCM over the last 14 quarters. So, let’s find out which hedge funds were among the top holders of the stock and which hedge funds were making big moves. 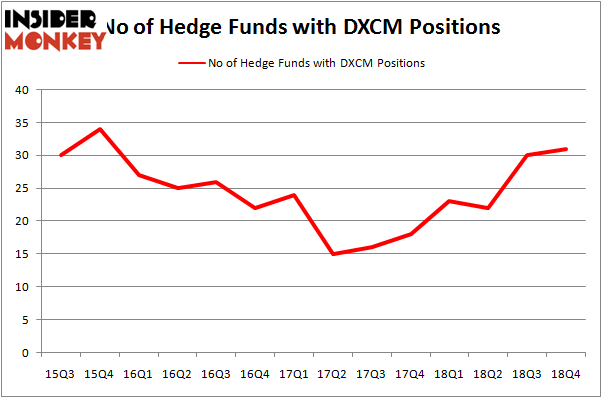 When looking at the institutional investors followed by Insider Monkey, Renaissance Technologies, managed by Jim Simons, holds the most valuable position in DexCom, Inc. (NASDAQ:DXCM). Renaissance Technologies has a $116.8 million position in the stock, comprising 0.1% of its 13F portfolio. Coming in second is John Overdeck and David Siegel of Two Sigma Advisors, with a $83.2 million position; 0.2% of its 13F portfolio is allocated to the stock. Other professional money managers with similar optimism comprise Columbus Circle Investors, Israel Englander’s Millennium Management and D. E. Shaw’s D E Shaw.

As aggregate interest increased, specific money managers have been driving this bullishness. OrbiMed Advisors, managed by Samuel Isaly, assembled the biggest position in DexCom, Inc. (NASDAQ:DXCM). OrbiMed Advisors had $16.6 million invested in the company at the end of the quarter. Paul Marshall and Ian Wace’s Marshall Wace LLP also initiated a $14 million position during the quarter. The other funds with new positions in the stock are Ken Griffin’s Citadel Investment Group, Louis Navellier’s Navellier & Associates, and Andrew Feldstein and Stephen Siderow’s Blue Mountain Capital.

As you can see these stocks had an average of 31.25 hedge funds with bullish positions and the average amount invested in these stocks was $1036 million. That figure was $738 million in DXCM’s case. Devon Energy Corp (NYSE:DVN) is the most popular stock in this table. On the other hand The J.M. Smucker Company (NYSE:SJM) is the least popular one with only 20 bullish hedge fund positions. DexCom, Inc. (NASDAQ:DXCM) is not the least popular stock in this group but hedge fund interest is still below average. Our calculations showed that top 15 most popular stocks among hedge funds returned 19.7% through March 15th and outperformed the S&P 500 ETF (SPY) by 6.6 percentage points. Hedge funds were also right about betting on DXCM as the stock returned 26% and outperformed the market as well.