Russell 2000 ETF (IWM) lagged the larger S&P 500 ETF (SPY) by nearly 9 percentage points since the end of the third quarter of 2018 as investors worried over the possible ramifications of rising interest rates and escalation of the trade war with China. The hedge funds and institutional investors we track typically invest more in smaller-cap stocks than an average investor (i.e. only 298 S&P 500 constituents were among the 500 most popular stocks among hedge funds), and we have seen data that shows those funds paring back their overall exposure. Those funds cutting positions in small-caps is one reason why volatility has increased. In the following paragraphs, we take a closer look at what hedge funds and prominent investors think of The Brink’s Company (NYSE:BCO) and see how the stock is affected by the recent hedge fund activity.

The Brink’s Company (NYSE:BCO) investors should be aware of an increase in hedge fund interest lately. Overall hedge fund sentiment towards BCO is now at its all time high. This is usually a bullish indicator. We observed this in other stocks like Roku, Uniqure, Avalara, and Disney. Roku returned returned 45%, Uniqure and Avalara delivered a 30% gain each, and Disney outperformed the market by 23 percentage points in Q2.

What does smart money think about The Brink’s Company (NYSE:BCO)? 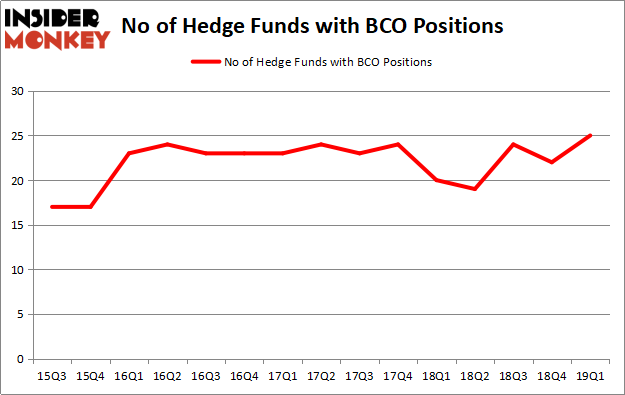 The largest stake in The Brink’s Company (NYSE:BCO) was held by P2 Capital Partners, which reported holding $150.2 million worth of stock at the end of March. It was followed by Deccan Value Advisors with a $128.2 million position. Other investors bullish on the company included Brahman Capital, Park West Asset Management, and Ariel Investments.

As you can see these stocks had an average of 16.5 hedge funds with bullish positions and the average amount invested in these stocks was $239 million. That figure was $491 million in BCO’s case. LiveRamp Holdings, Inc. (NYSE:RAMP) is the most popular stock in this table. On the other hand Enstar Group Ltd. (NASDAQ:ESGR) is the least popular one with only 11 bullish hedge fund positions. Compared to these stocks The Brink’s Company (NYSE:BCO) is more popular among hedge funds. Our calculations showed that top 20 most popular stocks among hedge funds returned 6.2% in Q2 through June 19th and outperformed the S&P 500 ETF (SPY) by nearly 3 percentage points. Hedge funds were also right about betting on BCO as the stock returned 9.8% during the same period and outperformed the market by an even larger margin. Hedge funds were clearly right about piling into this stock relative to other stocks with similar market capitalizations.