The market has been volatile in the last 6 months as the Federal Reserve continued its rate hikes and then abruptly reversed its stance and uncertainty looms over trade negotiations with China. Small cap stocks have been hit hard as a result, as the Russell 2000 ETF (IWM) has underperformed the larger S&P 500 ETF (SPY) by nearly 9 percentage points. SEC filings and hedge fund investor letters indicate that the smart money seems to be paring back their overall long exposure since summer months, though some funds increased their exposure dramatically at the end of Q4 and the beginning of Q1. In this article, we analyze what the smart money thinks of Celgene Corporation (NASDAQ:CELG) and find out how it is affected by hedge funds’ moves.

Celgene Corporation (NASDAQ:CELG) was in 101 hedge funds’ portfolios at the end of March. CELG has seen a huge increase in hedge fund interest recently. There were 58 hedge funds in our database with CELG positions at the end of the previous quarter. This is usually a very bullish signal. Another stock, Disney (DIS) saw a huge jump in hedge fund sentiment during the first quarter and it returned nearly 20% so far in the second quarter.

What does the smart money think about Celgene Corporation (NASDAQ:CELG)? 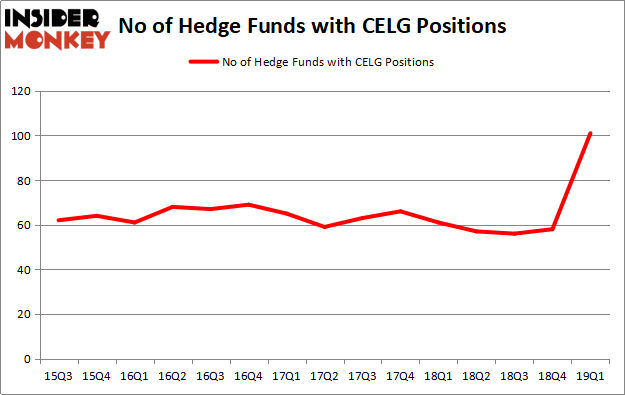 Among these funds, Orbis Investment Management held the most valuable stake in Celgene Corporation (NASDAQ:CELG), which was worth $1311 million at the end of the first quarter. On the second spot was Pentwater Capital Management which amassed $923.1 million worth of shares. Moreover, Adage Capital Management, Farallon Capital, and D E Shaw were also bullish on Celgene Corporation (NASDAQ:CELG), allocating a large percentage of their portfolios to this stock.

As you can see these stocks had an average of 33.5 hedge funds with bullish positions and the average amount invested in these stocks was $1559 million. That figure was $11077 million in CELG’s case. The TJX Companies, Inc. (NYSE:TJX) is the most popular stock in this table. On the other hand The Bank of Nova Scotia (NYSE:BNS) is the least popular one with only 14 bullish hedge fund positions. Compared to these stocks Celgene Corporation (NASDAQ:CELG) is more popular among hedge funds. Our calculations showed that top 20 most popular stocks among hedge funds returned 1.9% in Q2 through May 30th and outperformed the S&P 500 ETF (SPY) by more than 3 percentage points. Hedge funds were also right about betting on CELG, though not to the same extent, as the stock returned 0.2% during the same period and outperformed the market as well. Unfortunately, hedge fund interest in Celgene jumped due to BMY’s impending acquisition of the stock rather a dramatic change in the fundamentals of the stock. That’s probably why we didn’t see huge gains in Celgene shares the way we saw in Disney stock.