Hedge Funds Have Never Been This Bullish On Alector, Inc. (ALEC)

The elite funds run by legendary investors such as David Tepper and Dan Loeb make hundreds of millions of dollars for themselves and their investors by spending enormous resources doing research on small cap stocks that big investment banks don’t follow. Because of their pay structures, they have strong incentives to do the research necessary to beat the market. That’s why we pay close attention to what they think in small cap stocks. In this article, we take a closer look at Alector, Inc. (NASDAQ:ALEC) from the perspective of those elite funds.

Is Alector, Inc. (NASDAQ:ALEC) a buy right now? The smart money is getting more bullish. The number of bullish hedge fund positions went up by 1 in recent months. Our calculations also showed that ALEC isn’t among the 30 most popular stocks among hedge funds (see the video below). ALEC was in 13 hedge funds’ portfolios at the end of the second quarter of 2019. There were 12 hedge funds in our database with ALEC positions at the end of the previous quarter.

In the financial world there are dozens of indicators shareholders employ to value publicly traded companies. A couple of the less known indicators are hedge fund and insider trading signals. Our experts have shown that, historically, those who follow the best picks of the top money managers can outpace their index-focused peers by a solid margin (see the details here). 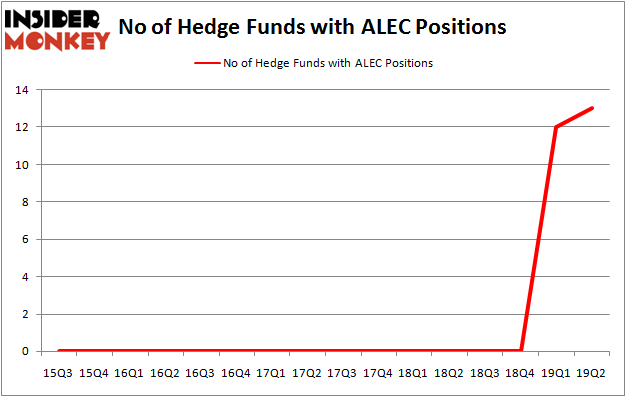 Heading into the third quarter of 2019, a total of 13 of the hedge funds tracked by Insider Monkey were bullish on this stock, a change of 8% from one quarter earlier. The graph below displays the number of hedge funds with bullish position in ALEC over the last 16 quarters. With hedge funds’ capital changing hands, there exists a few key hedge fund managers who were increasing their stakes substantially (or already accumulated large positions).

According to publicly available hedge fund and institutional investor holdings data compiled by Insider Monkey, OrbiMed Advisors, managed by Samuel Isaly, holds the largest position in Alector, Inc. (NASDAQ:ALEC). OrbiMed Advisors has a $250.5 million position in the stock, comprising 3.9% of its 13F portfolio. The second most bullish fund manager is Deerfield Management, led by James E. Flynn, holding a $33.2 million position; 1.2% of its 13F portfolio is allocated to the company. Some other members of the smart money with similar optimism consist of Peter Kolchinsky’s RA Capital Management, Jacob Doft’s Highline Capital Management and Eli Casdin’s Casdin Capital.

As industrywide interest jumped, key hedge funds were breaking ground themselves. Citadel Investment Group, managed by Ken Griffin, assembled the biggest position in Alector, Inc. (NASDAQ:ALEC). Citadel Investment Group had $0.8 million invested in the company at the end of the quarter. Chuck Royce’s Royce & Associates also made a $0 million investment in the stock during the quarter.

As you can see these stocks had an average of 19.25 hedge funds with bullish positions and the average amount invested in these stocks was $248 million. That figure was $348 million in ALEC’s case. Eventbrite, Inc. (NYSE:EB) is the most popular stock in this table. On the other hand Fate Therapeutics Inc (NASDAQ:FATE) is the least popular one with only 18 bullish hedge fund positions. Compared to these stocks Alector, Inc. (NASDAQ:ALEC) is even less popular than FATE. Hedge funds dodged a bullet by taking a bearish stance towards ALEC. Our calculations showed that the top 20 most popular hedge fund stocks returned 24.4% in 2019 through September 30th and outperformed the S&P 500 ETF (SPY) by 4 percentage points. Unfortunately ALEC wasn’t nearly as popular as these 20 stocks (hedge fund sentiment was very bearish); ALEC investors were disappointed as the stock returned -24.1% during the third quarter and underperformed the market. If you are interested in investing in large cap stocks with huge upside potential, you should check out the top 20 most popular stocks among hedge funds as many of these stocks already outperformed the market so far in 2019.

Bottomline Technologies (EPAY): Hedge Funds Buying, But Sentiment Is Still...
Monthly Newsletter Strategy
Download a free copy of our newsletter and see the details inside!
Hedge Fund Resource Center
Related News
Hedge Funds Have Never Been This Bullish On Alector, Inc. (ALEC) 11 Largest Auto Insurance Companies In The US In 2019 10 Poorest Cities in America in 2019 8 Lowest Tar and Nicotine Cigarette Brands in 2019
Billionaire Hedge Funds