Hedge Funds Have Never Been This Bullish On Activision Blizzard (ATVI)

At the end of February we announced the arrival of the first US recession since 2009 and we predicted that the market will decline by at least 20% in (Recession is Imminent: We Need A Travel Ban NOW). In these volatile markets we scrutinize hedge fund filings to get a reading on which direction each stock might be going. In this article, we will take a closer look at hedge fund sentiment towards Activision Blizzard, Inc. (NASDAQ:ATVI).

Activision Blizzard, Inc. (NASDAQ:ATVI) was in 101 hedge funds’ portfolios at the end of March. ATVI shareholders have witnessed a huge increase in support from the world’s most elite money managers in recent months. There were 76 hedge funds in our database with ATVI positions at the end of the previous quarter. Our calculations also showed that ATVI is among the 30 most popular stocks among hedge funds (click for Q1 rankings and see the video for a quick look at the top 5 stocks).

According to most stock holders, hedge funds are assumed to be underperforming, outdated investment vehicles of years past. While there are greater than 8000 funds in operation at present, Our researchers choose to focus on the leaders of this group, approximately 850 funds. It is estimated that this group of investors oversee the lion’s share of all hedge funds’ total capital, and by observing their finest stock picks, Insider Monkey has revealed several investment strategies that have historically exceeded the market. Insider Monkey’s flagship short hedge fund strategy surpassed the S&P 500 short ETFs by around 20 percentage points per annum since its inception in March 2017. Our portfolio of short stocks lost 36% since February 2017 (through May 18th) even though the market was up 30% during the same period. We just shared a list of 8 short targets in our latest quarterly update .

At Insider Monkey we leave no stone unturned when looking for the next great investment idea. For example Europe is set to become the world’s largest cannabis market, so we check out this European marijuana stock pitch. We believe electric vehicles and energy storage are set to become giant markets, and we want to take advantage of the declining lithium prices amid the COVID-19 pandemic. So we asked astrophysicist Neil deGrasse Tyson about Tesla, Elon Musk, and his top stock picks. We read hedge fund investor letters and listen to stock pitches at hedge fund conferences. Our best call in 2020 was shorting the market when S&P 500 was trading at 3150 after realizing the coronavirus pandemic’s significance before most investors. Now we’re going to take a peek at the key hedge fund action encompassing Activision Blizzard, Inc. (NASDAQ:ATVI).

At Q1’s end, a total of 101 of the hedge funds tracked by Insider Monkey were long this stock, a change of 33% from the fourth quarter of 2019. On the other hand, there were a total of 50 hedge funds with a bullish position in ATVI a year ago. With hedge funds’ positions undergoing their usual ebb and flow, there exists a select group of notable hedge fund managers who were adding to their holdings substantially (or already accumulated large positions). 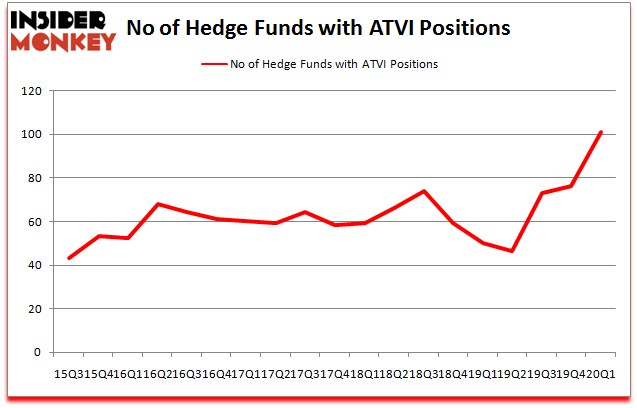 More specifically, Citadel Investment Group was the largest shareholder of Activision Blizzard, Inc. (NASDAQ:ATVI), with a stake worth $273.1 million reported as of the end of September. Trailing Citadel Investment Group was Alkeon Capital Management, which amassed a stake valued at $224.1 million. Jericho Capital Asset Management, SoMa Equity Partners, and Suvretta Capital Management were also very fond of the stock, becoming one of the largest hedge fund holders of the company. In terms of the portfolio weights assigned to each position Jericho Capital Asset Management allocated the biggest weight to Activision Blizzard, Inc. (NASDAQ:ATVI), around 13.82% of its 13F portfolio. Discovery Capital Management is also relatively very bullish on the stock, earmarking 10.28 percent of its 13F equity portfolio to ATVI.

As industrywide interest jumped, some big names have jumped into Activision Blizzard, Inc. (NASDAQ:ATVI) headfirst. Whale Rock Capital Management, managed by Alex Sacerdote, initiated the most outsized position in Activision Blizzard, Inc. (NASDAQ:ATVI). Whale Rock Capital Management had $117.5 million invested in the company at the end of the quarter. Peter Rathjens, Bruce Clarke and John Campbell’s Arrowstreet Capital also made a $95.9 million investment in the stock during the quarter. The other funds with new positions in the stock are Anand Parekh’s Alyeska Investment Group, Dmitry Balyasny’s Balyasny Asset Management, and Renaissance Technologies.

As you can see these stocks had an average of 48 hedge funds with bullish positions and the average amount invested in these stocks was $1867 million. That figure was $3054 million in ATVI’s case. Intercontinental Exchange Inc (NYSE:ICE) is the most popular stock in this table. On the other hand Illinois Tool Works Inc. (NYSE:ITW) is the least popular one with only 34 bullish hedge fund positions. Compared to these stocks Activision Blizzard, Inc. (NASDAQ:ATVI) is more popular among hedge funds. Our calculations showed that top 10 most popular stocks among hedge funds returned 41.4% in 2019 and outperformed the S&P 500 ETF (SPY) by 10.1 percentage points. These stocks returned 7.9% in 2020 through May 22nd but still managed to beat the market by 15.6 percentage points. Hedge funds were also right about betting on ATVI as the stock returned 23.7% so far in Q2 (through May 22nd) and outperformed the market by an even larger margin. Hedge funds were clearly right about piling into this stock relative to other stocks with similar market capitalizations.

Shopify Inc: COVID-19 Gave Rise to the Next Amazon