Hedge Funds and other institutional investors have just completed filing their 13Fs with the Securities and Exchange Commission, revealing their equity portfolios as of the end of June. At Insider Monkey, we follow nearly 750 active hedge funds and notable investors and by analyzing their 13F filings, we can determine the stocks that they are collectively bullish on. One of their picks is Activision Blizzard, Inc. (NASDAQ:ATVI), so let’s take a closer look at the sentiment that surrounds it in the current quarter.

Is Activision Blizzard, Inc. (NASDAQ:ATVI) the right pick for your portfolio? Prominent investors are becoming hopeful. The number of bullish hedge fund positions advanced by 24 lately. Our calculations also showed that ATVI isn’t among the 30 most popular stocks among hedge funds (see the video below). ATVI was in 70 hedge funds’ portfolios at the end of the third quarter of 2019. There were 46 hedge funds in our database with ATVI holdings at the end of the previous quarter.

At the end of the third quarter, a total of 70 of the hedge funds tracked by Insider Monkey were bullish on this stock, a change of 52% from the second quarter of 2019. By comparison, 74 hedge funds held shares or bullish call options in ATVI a year ago. With hedgies’ positions undergoing their usual ebb and flow, there exists a select group of noteworthy hedge fund managers who were upping their stakes substantially (or already accumulated large positions). 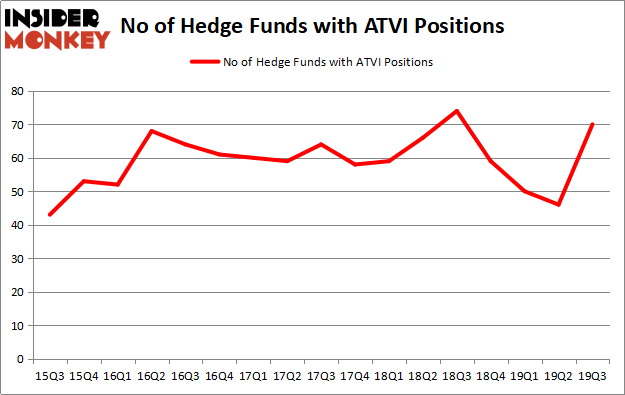 Among these funds, Lone Pine Capital held the most valuable stake in Activision Blizzard, Inc. (NASDAQ:ATVI), which was worth $595.1 million at the end of the third quarter. On the second spot was Coatue Management which amassed $320.6 million worth of shares. Alyeska Investment Group, Citadel Investment Group, and Suvretta Capital Management were also very fond of the stock, becoming one of the largest hedge fund holders of the company. In terms of the portfolio weights assigned to each position SoMa Equity Partners allocated the biggest weight to Activision Blizzard, Inc. (NASDAQ:ATVI), around 10.66% of its portfolio. AlphaOne Capital Partners is also relatively very bullish on the stock, designating 7.76 percent of its 13F equity portfolio to ATVI.

As you can see these stocks had an average of 46.75 hedge funds with bullish positions and the average amount invested in these stocks was $1993 million. That figure was $3015 million in ATVI’s case. Marathon Petroleum Corp (NYSE:MPC) is the most popular stock in this table. On the other hand Sempra Energy (NYSE:SRE) is the least popular one with only 28 bullish hedge fund positions. Compared to these stocks Activision Blizzard, Inc. (NASDAQ:ATVI) is more popular among hedge funds. Our calculations showed that top 20 most popular stocks among hedge funds returned 34.7% in 2019 through November 22nd and outperformed the S&P 500 ETF (SPY) by 8.5 percentage points. Unfortunately ATVI wasn’t nearly as popular as these 20 stocks and hedge funds that were betting on ATVI were disappointed as the stock returned 0.2% during the fourth quarter (through 11/22) and underperformed the market. If you are interested in investing in large cap stocks with huge upside potential, you should check out the top 20 most popular stocks among hedge funds as 70 percent of these stocks already outperformed the market in Q4.