In these volatile markets we scrutinize hedge fund filings to get a reading on which direction each stock might be going. We know that hedge funds generate strong, risk-adjusted returns over the long run, therefore imitating the picks that they are collectively bullish on can be a profitable strategy for retail investors. With billions of dollars in assets, smart money investors have to conduct complex analyses, spend many resources and use tools that are not always available for the general crowd. This doesn’t mean that they don’t have occasional colossal losses; they do (like Peltz’s recent General Electric losses). However, it is still a good idea to keep an eye on hedge fund activity. With this in mind, as the current round of 13F filings has just ended, let’s examine the smart money sentiment towards Activision Blizzard, Inc. (NASDAQ:ATVI).

Is Activision Blizzard, Inc. (NASDAQ:ATVI) a good investment today? Money managers are becoming hopeful. The number of bullish hedge fund positions advanced by 3 lately. Our calculations also showed that ATVI isn’t among the 30 most popular stocks among hedge funds (click for Q4 rankings and see the video at the end of this article for Q3 rankings). ATVI was in 76 hedge funds’ portfolios at the end of December. There were 73 hedge funds in our database with ATVI holdings at the end of the previous quarter.

We leave no stone unturned when looking for the next great investment idea. For example, this trader is claiming triple digit returns, so we check out his latest trade recommendations. Federal Reserve and Central Banks all around world are printing money like there is no tomorrow, so we check out this this precious metals expert’s stock pick. We read hedge fund investor letters and listen to stock pitches at hedge fund conferences (by the way watch this video if you want to hear one of the best healthcare hedge fund manager’s coronavirus analysis). Our best call in 2020 was shorting the market when S&P 500 was trading at 3150 after realizing the coronavirus pandemic’s significance before most investors. With all of this in mind let’s take a peek at the new hedge fund action surrounding Activision Blizzard, Inc. (NASDAQ:ATVI).

Heading into the first quarter of 2020, a total of 76 of the hedge funds tracked by Insider Monkey were long this stock, a change of 4% from one quarter earlier. On the other hand, there were a total of 59 hedge funds with a bullish position in ATVI a year ago. With hedge funds’ capital changing hands, there exists a few key hedge fund managers who were increasing their stakes substantially (or already accumulated large positions). 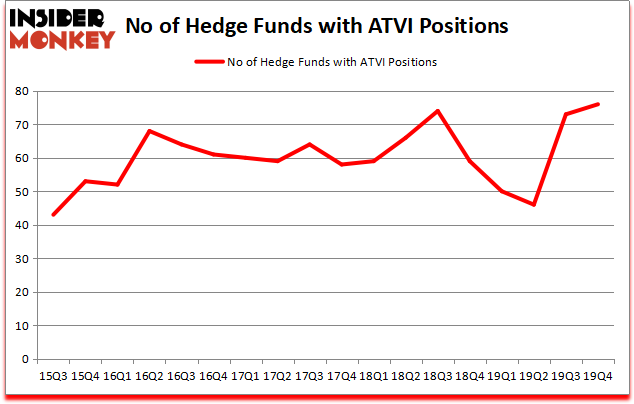 Among these funds, Coatue Management held the most valuable stake in Activision Blizzard, Inc. (NASDAQ:ATVI), which was worth $320.7 million at the end of the third quarter. On the second spot was Citadel Investment Group which amassed $282.5 million worth of shares. Jericho Capital Asset Management, Viking Global, and Alkeon Capital Management were also very fond of the stock, becoming one of the largest hedge fund holders of the company. In terms of the portfolio weights assigned to each position Hidden Lake Asset Management allocated the biggest weight to Activision Blizzard, Inc. (NASDAQ:ATVI), around 29.34% of its 13F portfolio. Jericho Capital Asset Management is also relatively very bullish on the stock, setting aside 15.25 percent of its 13F equity portfolio to ATVI.

As you can see these stocks had an average of 36.25 hedge funds with bullish positions and the average amount invested in these stocks was $3501 million. That figure was $2811 million in ATVI’s case. American International Group Inc (NYSE:AIG) is the most popular stock in this table. On the other hand Banco Santander (Brasil) SA (NYSE:BSBR) is the least popular one with only 8 bullish hedge fund positions. Compared to these stocks Activision Blizzard, Inc. (NASDAQ:ATVI) is more popular among hedge funds. Our calculations showed that top 10 most popular stocks among hedge funds returned 41.4% in 2019 and outperformed the S&P 500 ETF (SPY) by 10.1 percentage points. These stocks lost 1.0% in 2020 through April 20th but still managed to beat the market by 11 percentage points. Hedge funds were also right about betting on ATVI as the stock returned 12.7% so far in 2020 (through April 20th) and outperformed the market by an even larger margin. Hedge funds were clearly right about piling into this stock relative to other stocks with similar market capitalizations.