The market has been volatile in the last few months as the Federal Reserve continued its rate cuts and uncertainty looms over trade negotiations with China. Small cap stocks have been hit hard as a result, as the Russell 2000 ETF (IWM) has underperformed the larger S&P 500 ETF (SPY) by more than 10 percentage points over the last 12 months. SEC filings and hedge fund investor letters indicate that the smart money seems to be paring back their overall long exposure since summer months, though some funds increased their exposure dramatically at the end of Q2 and the beginning of Q3. In this article, we analyze what the smart money thinks of Activision Blizzard, Inc. (NASDAQ:ATVI) and find out how it is affected by hedge funds’ moves.

Is Activision Blizzard, Inc. (NASDAQ:ATVI) worth your attention right now? Prominent investors are taking a bearish view. The number of long hedge fund positions dropped by 4 in recent months. Our calculations also showed that ATVI isn’t among the 30 most popular stocks among hedge funds.

Unlike some fund managers who are betting on Dow reaching 40000 in a year, our long-short investment strategy doesn’t rely on bull markets to deliver double digit returns. We only rely on hedge fund buy/sell signals. We’re going to take a glance at the fresh hedge fund action regarding Activision Blizzard, Inc. (NASDAQ:ATVI).

Heading into the third quarter of 2019, a total of 46 of the hedge funds tracked by Insider Monkey held long positions in this stock, a change of -8% from the previous quarter. Below, you can check out the change in hedge fund sentiment towards ATVI over the last 16 quarters. So, let’s examine which hedge funds were among the top holders of the stock and which hedge funds were making big moves. 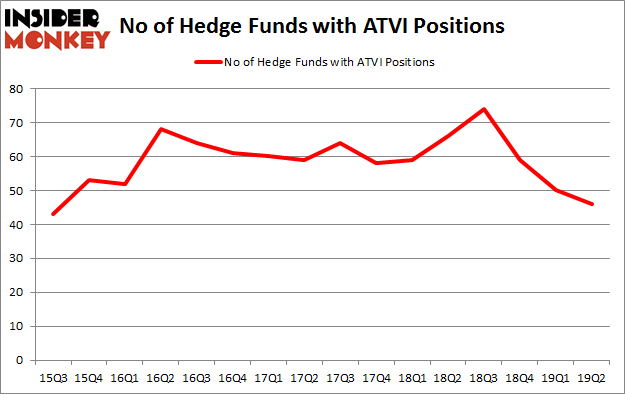 More specifically, Lone Pine Capital was the largest shareholder of Activision Blizzard, Inc. (NASDAQ:ATVI), with a stake worth $487.3 million reported as of the end of March. Trailing Lone Pine Capital was Viking Global, which amassed a stake valued at $373.3 million. Two Sigma Advisors, D E Shaw, and Coatue Management were also very fond of the stock, giving the stock large weights in their portfolios.

Seeing as Activision Blizzard, Inc. (NASDAQ:ATVI) has experienced falling interest from the smart money, we can see that there is a sect of money managers who were dropping their full holdings in the second quarter. Intriguingly, Renaissance Technologies said goodbye to the biggest stake of the “upper crust” of funds watched by Insider Monkey, comprising an estimated $214.1 million in stock, and Eashwar Krishnan’s Tybourne Capital Management was right behind this move, as the fund cut about $192.5 million worth. These moves are important to note, as aggregate hedge fund interest fell by 4 funds in the second quarter.

As you can see these stocks had an average of 42.75 hedge funds with bullish positions and the average amount invested in these stocks was $5270 million. That figure was $2957 million in ATVI’s case. Altaba Inc. (NASDAQ:AABA) is the most popular stock in this table. On the other hand SYSCO Corporation (NYSE:SYY) is the least popular one with only 31 bullish hedge fund positions. Activision Blizzard, Inc. (NASDAQ:ATVI) is not the most popular stock in this group but hedge fund interest is still above average. Our calculations showed that top 20 most popular stocks (see the video below) among hedge funds returned 24.4% in 2019 through September 30th and outperformed the S&P 500 ETF (SPY) by 4 percentage points. Hedge funds were also right about betting on ATVI as the stock returned 12.1% during the third quarter and outperformed the market. Hedge funds were rewarded for their relative bullishness.