Hedge Funds Cashed Out Of The Stars Group Inc. (TSG) Too Early

How do we determine whether The Stars Group Inc. (NASDAQ:TSG) makes for a good investment at the moment? We analyze the sentiment of a select group of the very best investors in the world, who spend immense amounts of time and resources studying companies. They may not always be right (no one is), but data shows that their consensus long positions have historically outperformed the market when we adjust for known risk factors.

The Stars Group Inc. (NASDAQ:TSG) shareholders have witnessed a decrease in hedge fund sentiment lately. Our calculations also showed that TSG isn’t among the 30 most popular stocks among hedge funds (click for Q3 rankings and see the video below for Q2 rankings).

Unlike the largest US hedge funds that are convinced Dow will soar past 40,000 or the world’s most bearish hedge fund that’s more convinced than ever that a crash is coming, our long-short investment strategy doesn’t rely on bull or bear markets to deliver double digit returns. We only rely on the best performing hedge funds‘ buy/sell signals. We’re going to take a glance at the latest hedge fund action encompassing The Stars Group Inc. (NASDAQ:TSG).

How are hedge funds trading The Stars Group Inc. (NASDAQ:TSG)? 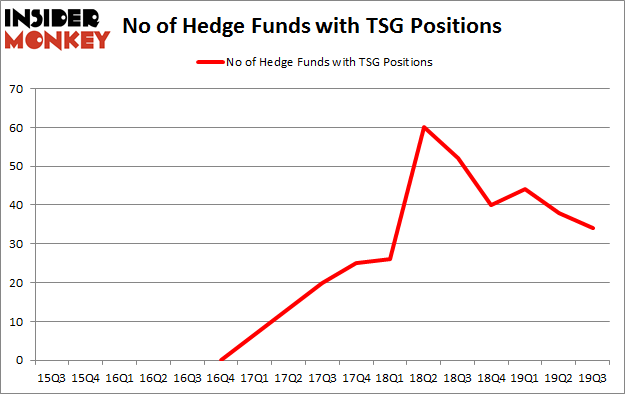 More specifically, ValueAct Capital was the largest shareholder of The Stars Group Inc. (NASDAQ:TSG), with a stake worth $204.2 million reported as of the end of September. Trailing ValueAct Capital was Tiger Legatus Capital, which amassed a stake valued at $97.3 million. Odey Asset Management Group, Harbor Spring Capital, and HG Vora Capital Management were also very fond of the stock, becoming one of the largest hedge fund holders of the company. In terms of the portfolio weights assigned to each position Springowl Associates allocated the biggest weight to The Stars Group Inc. (NASDAQ:TSG), around 52.17% of its portfolio. Tiger Legatus Capital is also relatively very bullish on the stock, designating 42.06 percent of its 13F equity portfolio to TSG.

Judging by the fact that The Stars Group Inc. (NASDAQ:TSG) has faced falling interest from the aggregate hedge fund industry, it’s safe to say that there exists a select few fund managers who sold off their entire stakes by the end of the third quarter. At the top of the heap, David Kowitz and Sheldon Kasowitz’s Indus Capital dropped the largest position of all the hedgies monitored by Insider Monkey, valued at close to $30 million in stock, and Richard Gerson and Navroz D. Udwadia’s Falcon Edge Capital was right behind this move, as the fund said goodbye to about $19.1 million worth. These bearish behaviors are important to note, as aggregate hedge fund interest fell by 4 funds by the end of the third quarter.

As you can see these stocks had an average of 20 hedge funds with bullish positions and the average amount invested in these stocks was $411 million. That figure was $717 million in TSG’s case. Six Flags Entertainment Corporation (NYSE:SIX) is the most popular stock in this table. On the other hand LG Display Co Ltd. (NYSE:LPL) is the least popular one with only 3 bullish hedge fund positions. The Stars Group Inc. (NASDAQ:TSG) is not the most popular stock in this group but hedge fund interest is still above average. Our calculations showed that top 20 most popular stocks among hedge funds returned 37.4% in 2019 through the end of November and outperformed the S&P 500 ETF (SPY) by 9.9 percentage points. Hedge funds were also right about betting on TSG as the stock returned 62.1% during the fourth quarter (through the end of November) and outperformed the market. Hedge funds were rewarded for their relative bullishness.