Is The Stars Group Inc. (NASDAQ:TSG) the right investment to pursue these days? Prominent investors are getting less optimistic. The number of long hedge fund positions were cut by 12 lately. Our calculations also showed that TSG isn’t among the 30 most popular stocks among hedge funds.

How have hedgies been trading The Stars Group Inc. (NASDAQ:TSG)? 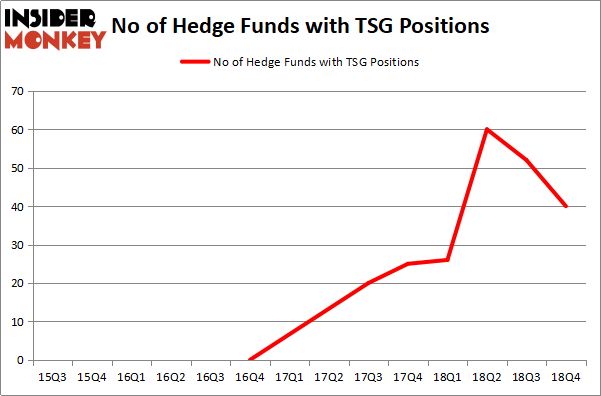 More specifically, Tiger Legatus Capital was the largest shareholder of The Stars Group Inc. (NASDAQ:TSG), with a stake worth $88.8 million reported as of the end of September. Trailing Tiger Legatus Capital was Odey Asset Management Group, which amassed a stake valued at $78 million. Indus Capital, BeaconLight Capital, and Cumberland Associates / Springowl Associates were also very fond of the stock, giving the stock large weights in their portfolios.

Because The Stars Group Inc. (NASDAQ:TSG) has faced falling interest from the smart money, logic holds that there exists a select few hedge funds that decided to sell off their full holdings in the third quarter. Interestingly, Matthew Sidman’s Three Bays Capital sold off the largest stake of the “upper crust” of funds followed by Insider Monkey, comprising an estimated $51.5 million in stock. Parag Vora’s fund, HG Vora Capital Management, also dropped its stock, about $49.8 million worth. These bearish behaviors are intriguing to say the least, as aggregate hedge fund interest was cut by 12 funds in the third quarter.

Let’s now take a look at hedge fund activity in other stocks – not necessarily in the same industry as The Stars Group Inc. (NASDAQ:TSG) but similarly valued. We will take a look at Wyndham Hotels & Resorts, Inc. (NYSE:WH), Cameco Corporation (NYSE:CCJ), SAGE Therapeutics Inc (NASDAQ:SAGE), and MongoDB, Inc. (NASDAQ:MDB). This group of stocks’ market values are similar to TSG’s market value.