It was a rough fourth quarter for many hedge funds, which were naturally unable to overcome the big dip in the broad market, as the S&P 500 fell by about 4.8% during 2018 and average hedge fund losing about 1%. The Russell 2000, composed of smaller companies, performed even worse, trailing the S&P by more than 6 percentage points, as investors fled less-known quantities for safe havens. Luckily hedge funds were shifting their holdings into large-cap stocks. The 20 most popular hedge fund stocks actually generated an average return of 24.4% during the first 9 months of 2019 and outperformed the S&P 500 ETF by 4 percentage points. We are done processing the latest 13f filings and in this article we will study how hedge fund sentiment towards The Stars Group Inc. (NASDAQ:TSG) changed during the first quarter.

Is The Stars Group Inc. (NASDAQ:TSG) a buy right now? Hedge funds are selling. The number of bullish hedge fund bets shrunk by 6 in recent months. Our calculations also showed that TSG isn’t among the 30 most popular stocks among hedge funds (see the video below). TSG was in 38 hedge funds’ portfolios at the end of June. There were 44 hedge funds in our database with TSG positions at the end of the previous quarter.

In the 21st century investor’s toolkit there are many methods market participants have at their disposal to evaluate publicly traded companies. A duo of the best methods are hedge fund and insider trading sentiment. Our experts have shown that, historically, those who follow the top picks of the elite hedge fund managers can trounce the market by a very impressive amount (see the details here).

What does smart money think about The Stars Group Inc. (NASDAQ:TSG)?

At the end of the second quarter, a total of 38 of the hedge funds tracked by Insider Monkey were long this stock, a change of -14% from the previous quarter. Below, you can check out the change in hedge fund sentiment towards TSG over the last 16 quarters. With the smart money’s sentiment swirling, there exists an “upper tier” of noteworthy hedge fund managers who were boosting their stakes substantially (or already accumulated large positions). 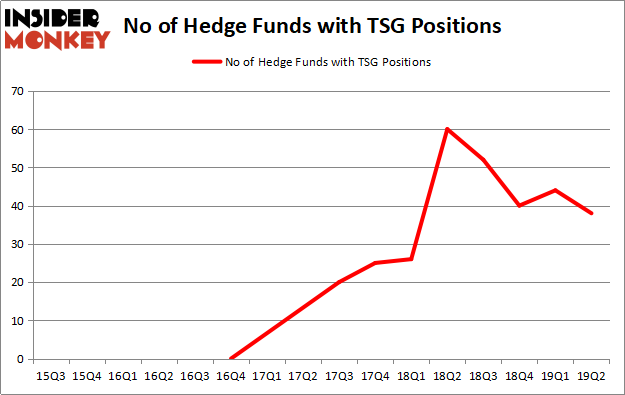 Of the funds tracked by Insider Monkey, ValueAct Capital, managed by Jeffrey Ubben, holds the biggest position in The Stars Group Inc. (NASDAQ:TSG). ValueAct Capital has a $232.7 million position in the stock, comprising 2.4% of its 13F portfolio. Coming in second is Tiger Legatus Capital, managed by Jesse Ro, which holds a $101.6 million position; the fund has 45.1% of its 13F portfolio invested in the stock. Remaining peers that are bullish comprise Crispin Odey’s Odey Asset Management Group, Amit Nitin Doshi’s Harbor Spring Capital and Parag Vora’s HG Vora Capital Management.

Judging by the fact that The Stars Group Inc. (NASDAQ:TSG) has experienced declining sentiment from the aggregate hedge fund industry, we can see that there were a few hedgies that elected to cut their full holdings heading into Q3. Intriguingly, Larry Robbins’s Glenview Capital dumped the biggest position of all the hedgies watched by Insider Monkey, valued at an estimated $29.5 million in stock, and Renaissance Technologies was right behind this move, as the fund dumped about $19.3 million worth. These bearish behaviors are intriguing to say the least, as total hedge fund interest fell by 6 funds heading into Q3.