Hedge Funds Are Warming Up To CIGNA Corporation (CI)

The 700+ hedge funds and famous money managers tracked by Insider Monkey have already compiled and submitted their 13F filings for the second quarter, which unveil their equity positions as of June 28. We went through these filings, fixed typos and other more significant errors and identified the changes in hedge fund portfolios. Our extensive review of these public filings is finally over, so this article is set to reveal the smart money sentiment towards CIGNA Corporation (NYSE:CI).

CIGNA Corporation (NYSE:CI) investors should pay attention to an increase in activity from the world’s largest hedge funds in recent months. Our calculations also showed that CI isn’t among the 30 most popular stocks among hedge funds. We recently covered Leon Cooperman’s comments about Cigna in an article.

To the average investor there are dozens of indicators stock traders put to use to evaluate their stock investments. A pair of the most under-the-radar indicators are hedge fund and insider trading sentiment. Our experts have shown that, historically, those who follow the top picks of the best investment managers can outperform the S&P 500 by a very impressive amount (see the details here).

Unlike some fund managers who are betting on Dow reaching 40000 in a year, our long-short investment strategy doesn’t rely on bull markets to deliver double digit returns. We only rely on hedge fund buy/sell signals. We’re going to review the new hedge fund action surrounding CIGNA Corporation (NYSE:CI).

How have hedgies been trading CIGNA Corporation (NYSE:CI)?

At the end of the second quarter, a total of 48 of the hedge funds tracked by Insider Monkey held long positions in this stock, a change of 2% from the previous quarter. On the other hand, there were a total of 49 hedge funds with a bullish position in CI a year ago. With hedge funds’ sentiment swirling, there exists a few notable hedge fund managers who were increasing their holdings substantially (or already accumulated large positions). 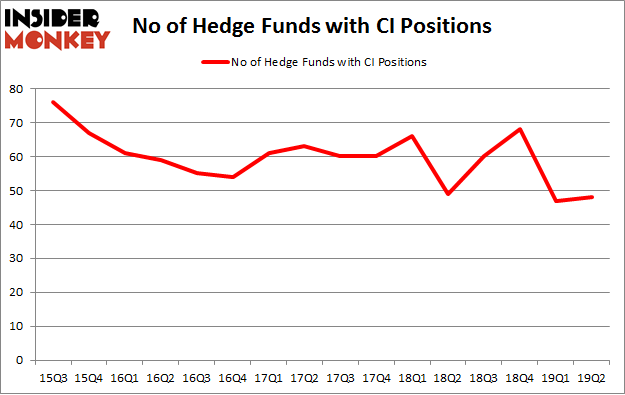 More specifically, Glenview Capital was the largest shareholder of CIGNA Corporation (NYSE:CI), with a stake worth $780.8 million reported as of the end of March. Trailing Glenview Capital was Kensico Capital, which amassed a stake valued at $225.3 million. BloombergSen, Lakewood Capital Management, and BloombergSen were also very fond of the stock, giving the stock large weights in their portfolios.

As one would reasonably expect, key money managers were leading the bulls’ herd. OZ Management, founded by Daniel S. Och, established the biggest position in CIGNA Corporation (NYSE:CI). OZ Management had $23.1 million invested in the company at the end of the quarter. Richard Rubin’s Hawkeye Capital also made a $11.6 million investment in the stock during the quarter. The other funds with brand new CI positions are Joseph Samuels’s Islet Management, Paul Marshall and Ian Wace’s Marshall Wace LLP, and Ram Seshan Venkateswaran’s Vernier Capital.

As you can see these stocks had an average of 28.5 hedge funds with bullish positions and the average amount invested in these stocks was $1223 million. That figure was $2664 million in CI’s case. Boston Scientific Corporation (NYSE:BSX) is the most popular stock in this table. On the other hand Eni SpA (NYSE:E) is the least popular one with only 5 bullish hedge fund positions. CIGNA Corporation (NYSE:CI) is not the most popular stock in this group but hedge fund interest is still above average. This is a slightly positive signal but we’d rather spend our time researching stocks that hedge funds are piling on. Our calculations showed that top 20 most popular stocks among hedge funds returned 24.4% in 2019 through September 30th and outperformed the S&P 500 ETF (SPY) by 4 percentage points. Unfortunately CI wasn’t nearly as popular as these 20 stocks and hedge funds that were betting on CI were disappointed as the stock returned -3.7% during the third quarter and underperformed the market. If you are interested in investing in large cap stocks with huge upside potential, you should check out the top 20 most popular stocks among hedge funds as many of these stocks already outperformed the market so far this year.