In these volatile markets we scrutinize hedge fund filings to get a reading on which direction each stock might be going. How do you pick the next stock to invest in? One way would be to spend days of research browsing through thousands of publicly traded companies. However, an easier way is to look at the stocks that smart money investors are collectively bullish on. Hedge funds and other institutional investors usually invest large amounts of capital and have to conduct due diligence while choosing their next pick. They don’t always get it right, but, on average, their stock picks historically generated strong returns after adjusting for known risk factors. With this in mind, let’s take a look at the recent hedge fund activity surrounding Silicon Motion Technology Corp. (NASDAQ:SIMO).

Is Silicon Motion Technology Corp. (NASDAQ:SIMO) a superb investment right now? Hedge funds are turning bullish. The number of long hedge fund positions moved up by 2 lately. Our calculations also showed that SIMO isn’t among the 30 most popular stocks among hedge funds (click for Q4 rankings and see the video at the end of this article for Q3 rankings). SIMO was in 17 hedge funds’ portfolios at the end of December. There were 15 hedge funds in our database with SIMO holdings at the end of the previous quarter.

We leave no stone unturned when looking for the next great investment idea. For example, we believe electric vehicles and energy storage are set to become giant markets, and we want to take advantage of the declining lithium prices amid the COVID-19 pandemic. So we are checking out investment opportunities like this one. We read hedge fund investor letters and listen to stock pitches at hedge fund conferences. Our best call in 2020 was shorting the market when S&P 500 was trading at 3150 after realizing the coronavirus pandemic’s significance before most investors. With all of this in mind let’s take a glance at the new hedge fund action encompassing Silicon Motion Technology Corp. (NASDAQ:SIMO).

Heading into the first quarter of 2020, a total of 17 of the hedge funds tracked by Insider Monkey held long positions in this stock, a change of 13% from the previous quarter. The graph below displays the number of hedge funds with bullish position in SIMO over the last 18 quarters. With hedgies’ sentiment swirling, there exists an “upper tier” of noteworthy hedge fund managers who were upping their stakes meaningfully (or already accumulated large positions). 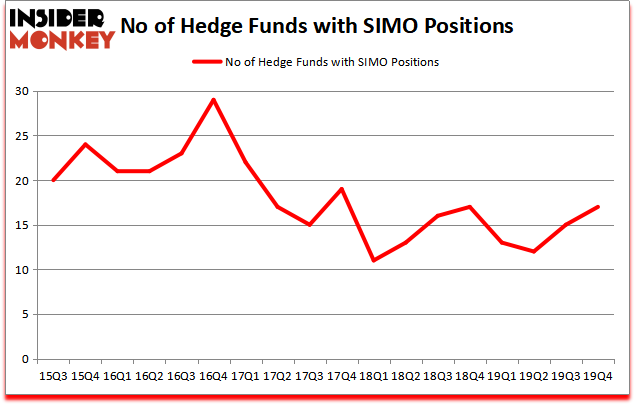 More specifically, Cardinal Capital was the largest shareholder of Silicon Motion Technology Corp. (NASDAQ:SIMO), with a stake worth $119.9 million reported as of the end of September. Trailing Cardinal Capital was Yiheng Capital, which amassed a stake valued at $60.2 million. Shellback Capital, Driehaus Capital, and Royce & Associates were also very fond of the stock, becoming one of the largest hedge fund holders of the company. In terms of the portfolio weights assigned to each position Yiheng Capital allocated the biggest weight to Silicon Motion Technology Corp. (NASDAQ:SIMO), around 5.29% of its 13F portfolio. Cardinal Capital is also relatively very bullish on the stock, earmarking 3.66 percent of its 13F equity portfolio to SIMO.

Consequently, specific money managers were leading the bulls’ herd. Shellback Capital, managed by Doug Gordon, Jon Hilsabeck and Don Jabro, created the largest position in Silicon Motion Technology Corp. (NASDAQ:SIMO). Shellback Capital had $29.3 million invested in the company at the end of the quarter. Richard Driehaus’s Driehaus Capital also made a $26.5 million investment in the stock during the quarter. The other funds with new positions in the stock are Ronald Hua’s Qtron Investments, Charles Davidson and Joseph Jacobs’s Wexford Capital, and Donald Sussman’s Paloma Partners.

As you can see these stocks had an average of 30 hedge funds with bullish positions and the average amount invested in these stocks was $332 million. That figure was $282 million in SIMO’s case. Constellium SE (NYSE:CSTM) is the most popular stock in this table. On the other hand Kaman Corporation (NYSE:KAMN) is the least popular one with only 19 bullish hedge fund positions. Compared to these stocks Silicon Motion Technology Corp. (NASDAQ:SIMO) is even less popular than KAMN. Hedge funds dodged a bullet by taking a bearish stance towards SIMO. Our calculations showed that the top 20 most popular hedge fund stocks returned 41.3% in 2019 and outperformed the S&P 500 ETF (SPY) by 10.1 percentage points. These stocks lost 13.0% in 2020 through April 6th but managed to beat the market by 4.2 percentage points. Unfortunately SIMO wasn’t nearly as popular as these 20 stocks (hedge fund sentiment was very bearish); SIMO investors were disappointed as the stock returned -18.6% during the same time period and underperformed the market. If you are interested in investing in large cap stocks with huge upside potential, you should check out the top 20 most popular stocks among hedge funds as most of these stocks already outperformed the market so far in 2020.