With the first-quarter round of 13F filings behind us it is time to take a look at the stocks in which some of the best money managers in the world preferred to invest or sell heading into the second quarter. One of these stocks was Silicon Motion Technology Corporation (NASDAQ:SIMO).

Silicon Motion Technology Corporation (NASDAQ:SIMO) was in 12 hedge funds’ portfolios at the end of June. SIMO investors should pay attention to a decrease in support from the world’s most elite money managers of late. There were 13 hedge funds in our database with SIMO holdings at the end of the previous quarter. Our calculations also showed that SIMO isn’t among the 30 most popular stocks among hedge funds (see the video below).

In today’s marketplace there are tons of gauges stock market investors have at their disposal to grade their stock investments. A couple of the most useful gauges are hedge fund and insider trading indicators. Our experts have shown that, historically, those who follow the best picks of the best fund managers can outperform the S&P 500 by a significant amount (see the details here). 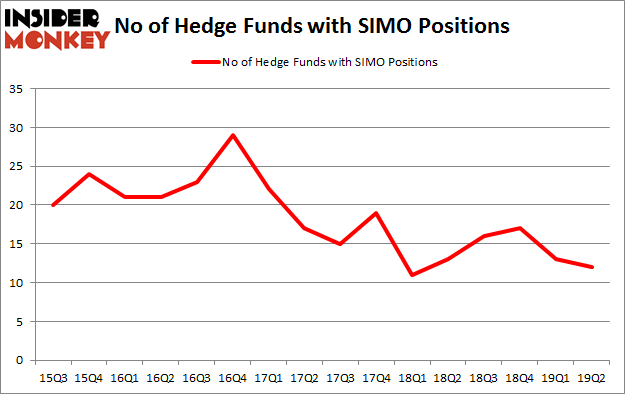 More specifically, Cardinal Capital was the largest shareholder of Silicon Motion Technology Corporation (NASDAQ:SIMO), with a stake worth $60.2 million reported as of the end of March. Trailing Cardinal Capital was Yiheng Capital, which amassed a stake valued at $40.9 million. Royce & Associates, Millennium Management, and D E Shaw were also very fond of the stock, giving the stock large weights in their portfolios.

Seeing as Silicon Motion Technology Corporation (NASDAQ:SIMO) has witnessed a decline in interest from the aggregate hedge fund industry, it’s easy to see that there lies a certain “tier” of funds who were dropping their entire stakes in the second quarter. At the top of the heap, C. Jonathan Gattman’s Cloverdale Capital Management cut the largest stake of the “upper crust” of funds monitored by Insider Monkey, valued at close to $14.7 million in stock, and Ernest Chow and Jonathan Howe’s Sensato Capital Management was right behind this move, as the fund cut about $0.8 million worth. These bearish behaviors are interesting, as total hedge fund interest dropped by 1 funds in the second quarter.

As you can see these stocks had an average of 19.75 hedge funds with bullish positions and the average amount invested in these stocks was $210 million. That figure was $141 million in SIMO’s case. Delphi Technologies PLC (NYSE:DLPH) is the most popular stock in this table. On the other hand Asbury Automotive Group, Inc. (NYSE:ABG) is the least popular one with only 17 bullish hedge fund positions. Compared to these stocks Silicon Motion Technology Corporation (NASDAQ:SIMO) is even less popular than ABG. Hedge funds dodged a bullet by taking a bearish stance towards SIMO. Our calculations showed that the top 20 most popular hedge fund stocks returned 24.4% in 2019 through September 30th and outperformed the S&P 500 ETF (SPY) by 4 percentage points. Unfortunately SIMO wasn’t nearly as popular as these 20 stocks (hedge fund sentiment was very bearish); SIMO investors were disappointed as the stock returned -19.6% during the third quarter and underperformed the market. If you are interested in investing in large cap stocks with huge upside potential, you should check out the top 20 most popular stocks among hedge funds as many of these stocks already outperformed the market so far in 2019.