Did Hedge Funds Drop The Ball On SharpSpring, Inc. (SHSP)?

The market has been volatile in the last few months as the Federal Reserve finalized its rate cuts and uncertainty looms over trade negotiations with China. Small cap stocks have been hit hard as a result, as the Russell 2000 ETF (IWM) has underperformed the larger S&P 500 ETF (SPY) by more than 10 percentage points over the last 12 months. SEC filings and hedge fund investor letters indicate that the smart money seems to be paring back their overall long exposure since summer months, though some funds increased their exposure dramatically at the end of Q3 and the beginning of Q4. In this article, we analyze what the smart money thinks of SharpSpring, Inc. (NASDAQ:SHSP) and find out how it is affected by hedge funds’ moves.

Is SharpSpring, Inc. (NASDAQ:SHSP) the right investment to pursue these days? Money managers are becoming less hopeful. The number of long hedge fund positions decreased by 1 recently. Our calculations also showed that SHSP isn’t among the 30 most popular stocks among hedge funds (click for Q3 rankings and see the video below for Q2 rankings).

In the 21st century investor’s toolkit there are a lot of tools stock traders employ to appraise publicly traded companies. Two of the best tools are hedge fund and insider trading activity. Our experts have shown that, historically, those who follow the top picks of the elite money managers can outperform their index-focused peers by a very impressive amount (see the details here).

We leave no stone unturned when looking for the next great investment idea. For example Discover is offering this insane cashback card, so we look into shorting the stock. One of the most bullish analysts in America just put his money where his mouth is. He says, “I’m investing more today than I did back in early 2009.” So we check out his pitch. We read hedge fund investor letters and listen to stock pitches at hedge fund conferences. We even check out this option genius’ weekly trade ideas. This December, we recommended Adams Energy as a one-way bet based on an under-the-radar fund manager’s investor letter and the stock already gained 20 percent. Keeping this in mind let’s go over the fresh hedge fund action encompassing SharpSpring, Inc. (NASDAQ:SHSP).

At Q3’s end, a total of 4 of the hedge funds tracked by Insider Monkey were bullish on this stock, a change of -20% from one quarter earlier. The graph below displays the number of hedge funds with bullish position in SHSP over the last 17 quarters. With hedgies’ capital changing hands, there exists a few key hedge fund managers who were boosting their holdings considerably (or already accumulated large positions). 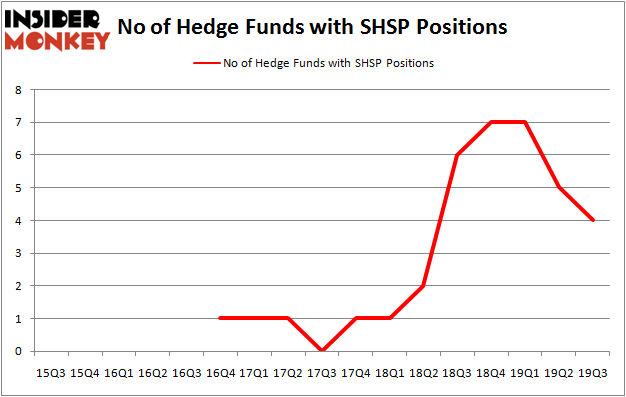 Of the funds tracked by Insider Monkey, Alexander Captain’s Cat Rock Capital has the number one position in SharpSpring, Inc. (NASDAQ:SHSP), worth close to $13.6 million, amounting to 2.1% of its total 13F portfolio. The second most bullish fund manager is Mark Broach of Manatuck Hill Partners, with a $2.4 million position; 1.3% of its 13F portfolio is allocated to the company. Other hedge funds and institutional investors with similar optimism encompass Chuck Royce’s Royce & Associates, Cliff Asness’s AQR Capital Management and . In terms of the portfolio weights assigned to each position Cat Rock Capital allocated the biggest weight to SharpSpring, Inc. (NASDAQ:SHSP), around 2.15% of its 13F portfolio. Manatuck Hill Partners is also relatively very bullish on the stock, dishing out 1.3 percent of its 13F equity portfolio to SHSP.

Due to the fact that SharpSpring, Inc. (NASDAQ:SHSP) has witnessed bearish sentiment from the aggregate hedge fund industry, logic holds that there is a sect of funds that slashed their full holdings heading into Q4. It’s worth mentioning that Anand Parekh’s Alyeska Investment Group said goodbye to the biggest stake of the 750 funds tracked by Insider Monkey, comprising about $1 million in stock, and Richard Driehaus’s Driehaus Capital was right behind this move, as the fund sold off about $0.2 million worth. These transactions are intriguing to say the least, as total hedge fund interest dropped by 1 funds heading into Q4.

As you can see these stocks had an average of 4 hedge funds with bullish positions and the average amount invested in these stocks was $8 million. That figure was $17 million in SHSP’s case. SeaChange International, Inc. (NASDAQ:SEAC) is the most popular stock in this table. On the other hand Concord Medical Services Holdings Ltd (NYSE:CCM) is the least popular one with only 1 bullish hedge fund positions. SharpSpring, Inc. (NASDAQ:SHSP) is not the least popular stock in this group but hedge fund interest is still below average. Our calculations showed that top 20 most popular stocks among hedge funds returned 37.4% in 2019 through the end of November and outperformed the S&P 500 ETF (SPY) by 9.9 percentage points. A small number of hedge funds were also right about betting on SHSP as the stock returned 29.7% during the first two months of Q4 and outperformed the market by an even larger margin.