Throughout history, the most powerful navy ships in the world have been the ships with the biggest guns. The amount of firepower a ship can unload on its target has been a determining factor of its usefulness in battle. In the 18th and 19th centuries those were ships of the line, wooden behemoths that ruled the Age of Sail. The most famous ship of the line was the HMS Victory, Admiral Nelson’s flagship at the battle of Trafalgar, but the largest ever built was the French Valmy, armed with 120 cannons and displacing 5,826 tons, with a crew of 1,100. The age of wooden ships came to an abrupt end once explosive shells enter the arsenals of the world’s navies. Ironclads came next, carrying fewer, but much more potent guns.

The first battle between two ironclads was during the American Civil War when the USS Monitor was dispatched to deal with the CSS Virginia–more commonly known as the Merrimack. Despite numerous hits, neither ship was able to penetrate the armor of its opponent and the battle ended in a draw. These ships, propelled by both sails and steam, were rapidly becoming obsolete due to technological advancements during the Industrial Revolution, sometimes as fast as they left the shipyard. For instance, the HMS Warrior, launched in 1861, was considered obsolete by 1871, after a mere ten years in service. Compared to the HMS Victory, launched in 1765 and which served until 1824, ironclads had an awful return on investment. 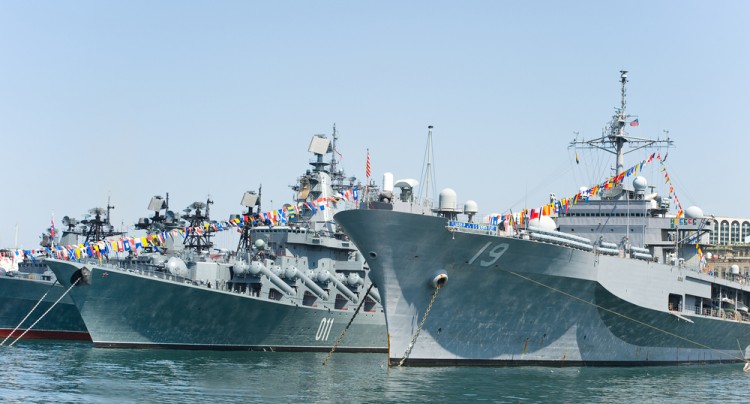 But the true warship-building revolution was yet to come. In 1906, the Royal Navy launched the HMS Dreadnaught and overnight, every other warship on the planet became obsolete just like that. Such was the impact of the Dreadnaught’s revolutionary design that all battleships built according to its specifications became known as the dreadnaught type. The era of modern battleships had begun, culminating in World War II monsters like the Bismarck, King George V, Iowa, and Yamato, the biggest battleship ever built. But as battleships were engrossed in their size-measuring contest, another ship type stole the title of the most powerful ship in the world. Aircraft carriers were off to a humble start, although the first take off of an airplane from a ship came in 1910, a mere seven years after the historic Wright brothers’ flight.

The true power of an aircraft carrier was demonstrated on December 7, 1941. A Japanese task force of six fleet carriers launched two waves of devastating attacks on the U.S Navy’s base in Pearl Harbor. Soon, every navy in the world was scrambling to build carriers, with the United States leading the charge. Today, the most powerful aircraft carriers in the world are the U.S Navy’s Nimitz and Ford-class supercarriers, displacing more than 100,000 tons, with crews of 5,000+. Each of them carries a complement of 75 aircraft, which makes every single one of them more powerful than most air forces on the planet.

During the Cold War, the Soviet Union was quick to realize that it couldn’t compete with such power. They say that necessity is the mother of invention and the Soviet’s necessity was indeed great. In 1955, they managed to equip and successfully launch a ballistic missile from a submarine. The new naval threat, the greatest of all so far, was born. A ballistic missile submarine is able to wipe out entire nations with a single salvo of its arsenal. The power they wield is unparalleled in the history of warfare and it can’t be compared to any weapon system in human history, even for the foreseeable future. These silent predators are indeed the most powerful ships in the world today. In fact, they are so powerful that we decided to leave them out of this list altogether, lest it become an article about the most powerful submarines in the world. Instead, we focused on surface ships, mainly aircraft carriers and their variants, such as amphibious assault ships, featuring full-length landing decks and a well dock, capable of launching over-the-horizon attacks. We ranked them according to their offensive firepower, the number of aircraft they carry, and their marine landing elements. Needless to say, they are all in service with the 11 Strongest Navies in the World.

Honorable mention goes to the Kirov-class Pyotr Velikiy (Peter the Great) and Admiral Nakhimov, the last battlecruisers on the world’s seas. Still sailing in 2017, the massive 28,000 ton-vessels are the largest surface combatants in the world and a truly formidable sight. Although some would say that they are relics of the past, their armament and sheer size ensure that whenever a conversation about the most powerful navy ships in the world today is held, they must at least be mentioned.

10 Easiest Etsy Businesses to Start and Make Tons of Money
Monthly Newsletter Strategy
Download a free copy of our newsletter and see the details inside!
Hedge Fund Resource Center
Lists