What does the smart money think about Zimmer Biomet Holdings Inc (NYSE:ZBH)?

Heading into the first quarter of 2019, a total of 36 of the hedge funds tracked by Insider Monkey were long this stock, a change of -10% from the previous quarter. Below, you can check out the change in hedge fund sentiment towards ZBH over the last 14 quarters. With the smart money’s sentiment swirling, there exists a few notable hedge fund managers who were boosting their holdings considerably (or already accumulated large positions). 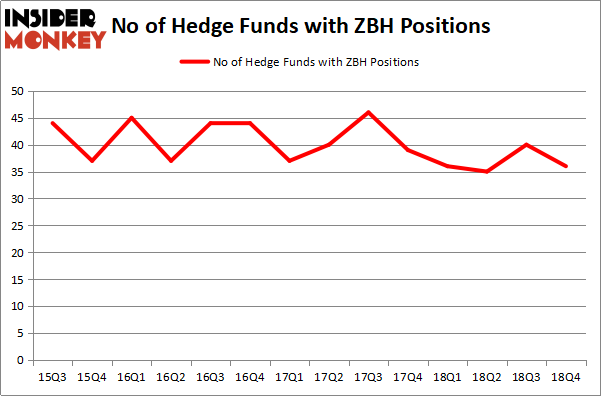 Among these funds, JANA Partners held the most valuable stake in Zimmer Biomet Holdings Inc (NYSE:ZBH), which was worth $237.4 million at the end of the third quarter. On the second spot was Healthcor Management LP which amassed $214.5 million worth of shares. Moreover, Ariel Investments, D E Shaw, and Partner Fund Management were also bullish on Zimmer Biomet Holdings Inc (NYSE:ZBH), allocating a large percentage of their portfolios to this stock.

Because Zimmer Biomet Holdings Inc (NYSE:ZBH) has witnessed a decline in interest from the aggregate hedge fund industry, logic holds that there was a specific group of hedgies who were dropping their positions entirely by the end of the third quarter. Interestingly, Israel Englander’s Millennium Management dumped the biggest investment of the 700 funds monitored by Insider Monkey, valued at an estimated $171.7 million in stock. Roberto Mignone’s fund, Bridger Management, also sold off its stock, about $92.7 million worth. These transactions are important to note, as aggregate hedge fund interest dropped by 4 funds by the end of the third quarter.

As you can see these stocks had an average of 25.75 hedge funds with bullish positions and the average amount invested in these stocks was $746 million. That figure was $1038 million in ZBH’s case. AutoZone, Inc. (NYSE:AZO) is the most popular stock in this table. On the other hand ArcelorMittal (NYSE:MT) is the least popular one with only 13 bullish hedge fund positions. Zimmer Biomet Holdings Inc (NYSE:ZBH) is not the most popular stock in this group but hedge fund interest is still above average. Our calculations showed that top 15 most popular stocks among hedge funds returned 19.7% through March 15th and outperformed the S&P 500 ETF (SPY) by 6.6 percentage points. Hedge funds were also right about betting on ZBH as the stock returned 21.4% and outperformed the market as well.