Were Hedge Funds Right About Warming Up To Jack Henry & Associates, Inc. (JKHY)?

Our extensive research has shown that imitating the smart money can generate significant returns for retail investors, which is why we track nearly 750 active prominent money managers and analyze their quarterly 13F filings. The stocks that are heavily bought by hedge funds historically outperformed the market, though there is no shortage of high profile failures like hedge funds’ 2018 losses in Facebook and Apple. Let’s take a closer look at what the funds we track think about Jack Henry & Associates, Inc. (NASDAQ:JKHY) in this article.

Jack Henry & Associates, Inc. (NASDAQ:JKHY) investors should pay attention to an increase in enthusiasm from smart money of late. JKHY was in 18 hedge funds’ portfolios at the end of June. There were 17 hedge funds in our database with JKHY holdings at the end of the previous quarter. Our calculations also showed that JKHY isn’t among the 30 most popular stocks among hedge funds (see the video below).

Unlike this former hedge fund manager who is convinced Dow will soar past 40000, our long-short investment strategy doesn’t rely on bull markets to deliver double digit returns. We only rely on hedge fund buy/sell signals. We’re going to check out the fresh hedge fund action regarding Jack Henry & Associates, Inc. (NASDAQ:JKHY). 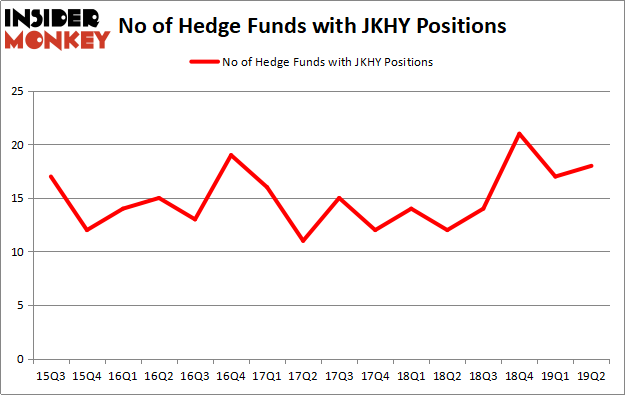 With a general bullishness amongst the heavyweights, some big names have been driving this bullishness. Millennium Management, managed by Israel Englander, assembled the most valuable position in Jack Henry & Associates, Inc. (NASDAQ:JKHY). Millennium Management had $4.3 million invested in the company at the end of the quarter. Lee Ainslie’s Maverick Capital also made a $3.9 million investment in the stock during the quarter. The following funds were also among the new JKHY investors: Ken Griffin’s Citadel Investment Group, Bruce Kovner’s Caxton Associates LP, and Steve Cohen’s Point72 Asset Management.

Let’s now take a look at hedge fund activity in other stocks – not necessarily in the same industry as Jack Henry & Associates, Inc. (NASDAQ:JKHY) but similarly valued. We will take a look at PTC Inc (NASDAQ:PTC), The Trade Desk, Inc. (NASDAQ:TTD), Noble Energy, Inc. (NYSE:NBL), and Array Biopharma Inc (NASDAQ:ARRY). This group of stocks’ market values are closest to JKHY’s market value.

As you can see these stocks had an average of 32.5 hedge funds with bullish positions and the average amount invested in these stocks was $1351 million. That figure was $133 million in JKHY’s case. Array Biopharma Inc (NASDAQ:ARRY) is the most popular stock in this table. On the other hand PTC Inc (NASDAQ:PTC) is the least popular one with only 23 bullish hedge fund positions. Compared to these stocks Jack Henry & Associates, Inc. (NASDAQ:JKHY) is even less popular than PTC. Hedge funds clearly dropped the ball on JKHY as the stock delivered strong returns, though hedge funds’ consensus picks still generated respectable returns. Our calculations showed that top 20 most popular stocks among hedge funds returned 24.4% in 2019 through September 30th and outperformed the S&P 500 ETF (SPY) by 4 percentage points. A small number of hedge funds were also right about betting on JKHY as the stock returned 9.3% during the third quarter and outperformed the market by an even larger margin.