Visa Inc (NYSE:V) has experienced an increase in activity from the world’s largest hedge funds of late. Our calculations also showed that V is also among the 30 most popular stocks among hedge funds and hedge fund sentiment towards the stock is at an all time high.

This is usually a very bullish signal. For example hedge fund sentiment in Xilinx Inc. (XLNX) was also at its all time high at the beginning of this year and the stock returned more than 46% in 2.5 months. We observed a similar performance from Progressive Corporation (PGR) which returned 27% and outperformed the SPY by nearly 14 percentage points in 2.5 months. Hedge fund sentiment towards IQVIA Holdings Inc. (IQV), Brookfield Asset Management Inc. (BAM), Atlassian Corporation Plc (TEAM), RCL, and CRH hit all time hedge fund sentiment highs at the end of December, and all of these stocks returned more than 20% in the first 2.5 months of this year.

At the end of the fourth quarter, a total of 128 of the hedge funds tracked by Insider Monkey held long positions in this stock, a change of 14% from one quarter earlier. Below, you can check out the change in hedge fund sentiment towards V over the last 14 quarters. So, let’s find out which hedge funds were among the top holders of the stock and which hedge funds were making big moves. 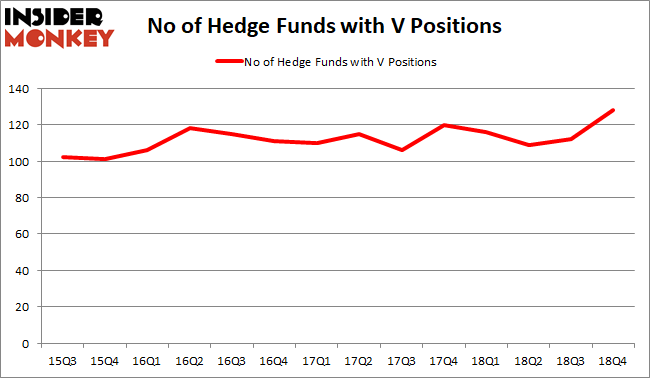 Among these funds, Fisher Asset Management held the most valuable stake in Visa Inc (NYSE:V), which was worth $2457 million at the end of the third quarter. On the second spot was Berkshire Hathaway which amassed $1393.6 million worth of shares. Moreover, Viking Global, Arrowstreet Capital, and Akre Capital Management were also bullish on Visa Inc (NYSE:V), allocating a large percentage of their portfolios to this stock.

As one would reasonably expect, specific money managers were leading the bulls’ herd. Renaissance Technologies, managed by Jim Simons, established the most valuable position in Visa Inc (NYSE:V). Renaissance Technologies had $219.7 million invested in the company at the end of the quarter. Doug Silverman and Alexander Klabin’s Senator Investment Group also initiated a $164.9 million position during the quarter. The other funds with brand new V positions in our database are Snehal Amin’s Windacre Partnership, Daniel Sundheim’s D1 Capital Partners, and Steve Cohen’s Point72 Asset Management.