Were Hedge Funds Right About The Procter & Gamble Company (PG)?

At Insider Monkey, we pore over the filings of nearly 750 top investment firms every quarter, a process we have now completed for the latest reporting period. The data we’ve gathered as a result gives us access to a wealth of collective knowledge based on these firms’ portfolio holdings as of June 28. In this article, we will use that wealth of knowledge to determine whether or not The Procter & Gamble Company (NYSE:PG) makes for a good investment right now.

The Procter & Gamble Company (NYSE:PG) shareholders have witnessed an increase in activity from the world’s largest hedge funds in recent months. PG was in 58 hedge funds’ portfolios at the end of June. There were 56 hedge funds in our database with PG holdings at the end of the previous quarter. Our calculations also showed that PG isn’t among the 30 most popular stocks among hedge funds.

Unlike some fund managers who are betting on Dow reaching 40000 in a year, our long-short investment strategy doesn’t rely on bull markets to deliver double digit returns. We only rely on hedge fund buy/sell signals. We’re going to analyze the fresh hedge fund action surrounding The Procter & Gamble Company (NYSE:PG).

What does smart money think about The Procter & Gamble Company (NYSE:PG)?

Heading into the third quarter of 2019, a total of 58 of the hedge funds tracked by Insider Monkey were bullish on this stock, a change of 4% from the first quarter of 2019. On the other hand, there were a total of 44 hedge funds with a bullish position in PG a year ago. With hedge funds’ positions undergoing their usual ebb and flow, there exists an “upper tier” of noteworthy hedge fund managers who were adding to their stakes significantly (or already accumulated large positions). 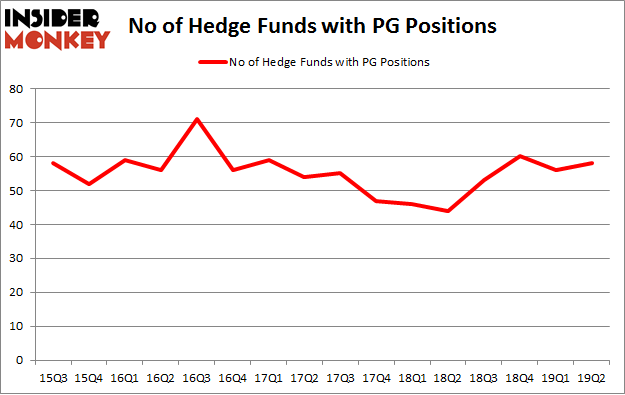 According to publicly available hedge fund and institutional investor holdings data compiled by Insider Monkey, Trian Partners, managed by Nelson Peltz, holds the biggest position in The Procter & Gamble Company (NYSE:PG). Trian Partners has a $4.0165 billion position in the stock, comprising 42.4% of its 13F portfolio. The second most bullish fund manager is Cedar Rock Capital, managed by Andy Brown, which holds a $1.3257 billion position; the fund has 31.4% of its 13F portfolio invested in the stock. Some other peers that are bullish encompass Donald Yacktman’s Yacktman Asset Management, Cliff Asness’s AQR Capital Management and Ken Fisher’s Fisher Asset Management.

As one would reasonably expect, specific money managers have jumped into The Procter & Gamble Company (NYSE:PG) headfirst. Laurion Capital Management, managed by Benjamin A. Smith, created the biggest call position in The Procter & Gamble Company (NYSE:PG). Laurion Capital Management had $76.8 million invested in the company at the end of the quarter. John Overdeck and David Siegel’s Two Sigma Advisors also made a $22.3 million investment in the stock during the quarter. The other funds with brand new PG positions are Michael Gelband’s ExodusPoint Capital, Lee Ainslie’s Maverick Capital, and Steve Cohen’s Point72 Asset Management.

Let’s check out hedge fund activity in other stocks – not necessarily in the same industry as The Procter & Gamble Company (NYSE:PG) but similarly valued. We will take a look at Bank of America Corporation (NYSE:BAC), Mastercard Incorporated (NYSE:MA), Royal Dutch Shell plc (NYSE:RDS), and The Walt Disney Company (NYSE:DIS). This group of stocks’ market caps are closest to PG’s market cap.

As you can see these stocks had an average of 85 hedge funds with bullish positions and the average amount invested in these stocks was $12853 million. That figure was $9859 million in PG’s case. The Walt Disney Company (NYSE:DIS) is the most popular stock in this table. On the other hand Royal Dutch Shell plc (NYSE:RDS) is the least popular one with only 34 bullish hedge fund positions. The Procter & Gamble Company (NYSE:PG) is not the least popular stock in this group but hedge fund interest is still below average though hedge fund sentiment towards the stock has been improving. Our calculations showed that top 20 most popular stocks among hedge funds returned 24.4% in 2019 through September 30th and outperformed the S&P 500 ETF (SPY) by 4 percentage points. Hedge funds listed above were also right about betting on PG as the stock returned 14.2% during the same time frame and outperformed the market by an even larger margin.