Is Royal Caribbean Cruises Ltd. (NYSE:RCL) a good place to invest some of your money right now? We can gain invaluable insight to help us answer that question by studying the investment trends of top investors, who employ world-class Ivy League graduates, who are given immense resources and industry contacts to put their financial expertise to work. The top picks of these firms have historically outperformed the market when we account for known risk factors, making them very valuable investment ideas.

Royal Caribbean Cruises Ltd. (NYSE:RCL) shareholders have witnessed a decrease in hedge fund interest lately. Our calculations also showed that RCL isn’t among the 30 most popular stocks among hedge funds (see the video below).

At the moment there are a large number of tools shareholders employ to evaluate publicly traded companies. Some of the most innovative tools are hedge fund and insider trading moves. Our experts have shown that, historically, those who follow the top picks of the best investment managers can outpace the broader indices by a significant margin (see the details here). 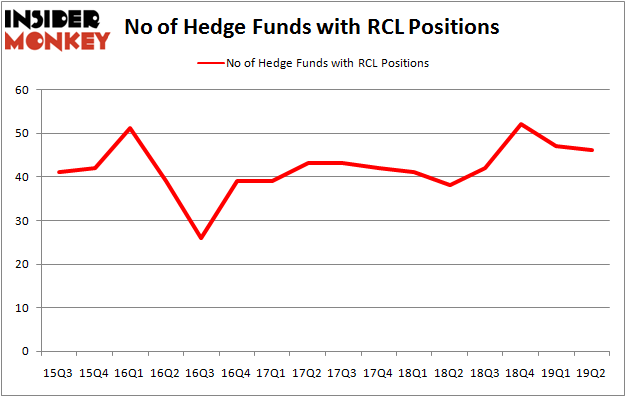 Unlike some fund managers who are betting on Dow reaching 40000 in a year, our long-short investment strategy doesn’t rely on bull markets to deliver double digit returns. We only rely on hedge fund buy/sell signals. Let’s take a gander at the key hedge fund action encompassing Royal Caribbean Cruises Ltd. (NYSE:RCL).

Heading into the third quarter of 2019, a total of 46 of the hedge funds tracked by Insider Monkey were long this stock, a change of -2% from the previous quarter. By comparison, 38 hedge funds held shares or bullish call options in RCL a year ago. With the smart money’s sentiment swirling, there exists a select group of notable hedge fund managers who were upping their stakes considerably (or already accumulated large positions).

According to publicly available hedge fund and institutional investor holdings data compiled by Insider Monkey, D E Shaw, managed by D. E. Shaw, holds the most valuable position in Royal Caribbean Cruises Ltd. (NYSE:RCL). D E Shaw has a $260.8 million position in the stock, comprising 0.3% of its 13F portfolio. The second largest stake is held by Eminence Capital, managed by Ricky Sandler, which holds a $179.8 million position; the fund has 2.4% of its 13F portfolio invested in the stock. Other members of the smart money with similar optimism encompass John Overdeck and David Siegel’s Two Sigma Advisors, Andrew Immerman and Jeremy Schiffman’s Palestra Capital Management and John W. Rogers’s Ariel Investments.

Judging by the fact that Royal Caribbean Cruises Ltd. (NYSE:RCL) has experienced bearish sentiment from the smart money, we can see that there is a sect of fund managers that elected to cut their positions entirely by the end of the second quarter. Interestingly, Gabriel Plotkin’s Melvin Capital Management said goodbye to the biggest stake of the 750 funds monitored by Insider Monkey, comprising an estimated $65.9 million in stock. Aaron Cowen’s fund, Suvretta Capital Management, also dropped its stock, about $54.3 million worth. These transactions are interesting, as total hedge fund interest dropped by 1 funds by the end of the second quarter.

As you can see these stocks had an average of 20.75 hedge funds with bullish positions and the average amount invested in these stocks was $283 million. That figure was $1330 million in RCL’s case. Cintas Corporation (NASDAQ:CTAS) is the most popular stock in this table. On the other hand Tencent Music Entertainment Group (NYSE:TME) is the least popular one with only 11 bullish hedge fund positions. Compared to these stocks Royal Caribbean Cruises Ltd. (NYSE:RCL) is more popular among hedge funds. Our calculations showed that top 20 most popular stocks among hedge funds returned 24.4% in 2019 through September 30th and outperformed the S&P 500 ETF (SPY) by 4 percentage points. Unfortunately RCL wasn’t nearly as popular as these 20 stocks and hedge funds that were betting on RCL were disappointed as the stock returned -10% during the third quarter and underperformed the market. If you are interested in investing in large cap stocks with huge upside potential, you should check out the top 20 most popular stocks among hedge funds as many of these stocks already outperformed the market in Q3.