In these volatile markets we scrutinize hedge fund filings to get a reading on which direction each stock might be going. The latest 13F reporting period has come and gone, and Insider Monkey is again at the forefront when it comes to making use of this gold mine of data. We at Insider Monkey have plowed through 835 13F filings that hedge funds and well-known value investors are required to file by the SEC. The 13F filings show the funds’ and investors’ portfolio positions as of December 31st. In this article we look at what those investors think of Principia Biopharma Inc. (NASDAQ:PRNB).

Principia Biopharma Inc. (NASDAQ:PRNB) shareholders have witnessed an increase in hedge fund sentiment of late. Our calculations also showed that PRNB isn’t among the 30 most popular stocks among hedge funds (click for Q4 rankings and see the video at the end of this article for Q3 rankings).

We leave no stone unturned when looking for the next great investment idea. For example, Federal Reserve and other Central Banks are tripping over each other to print more money. As a result, we believe gold stocks will outperform fixed income ETFs in the long-term. So we are checking out investment opportunities like this one. We read hedge fund investor letters and listen to stock pitches at hedge fund conferences (by the way watch this video if you want to hear one of the best healthcare hedge fund manager’s coronavirus analysis). Our best call in 2020 was shorting the market when S&P 500 was trading at 3150 after realizing the coronavirus pandemic’s significance before most investors. Now we’re going to take a look at the recent hedge fund action surrounding Principia Biopharma Inc. (NASDAQ:PRNB).

At Q4’s end, a total of 20 of the hedge funds tracked by Insider Monkey were bullish on this stock, a change of 67% from the previous quarter. The graph below displays the number of hedge funds with bullish position in PRNB over the last 18 quarters. With hedge funds’ positions undergoing their usual ebb and flow, there exists an “upper tier” of notable hedge fund managers who were upping their holdings substantially (or already accumulated large positions). 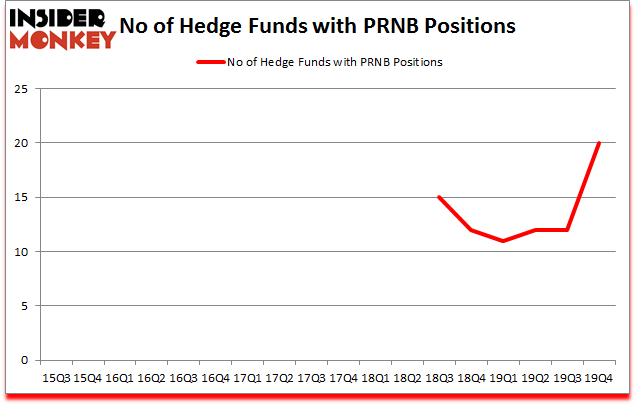 Of the funds tracked by Insider Monkey, Jeremy Green’s Redmile Group has the most valuable position in Principia Biopharma Inc. (NASDAQ:PRNB), worth close to $149.1 million, comprising 3.6% of its total 13F portfolio. On Redmile Group’s heels is Bihua Chen of Cormorant Asset Management, with a $109.1 million position; the fund has 4.4% of its 13F portfolio invested in the stock. Some other hedge funds and institutional investors that hold long positions include Julian Baker and Felix Baker’s Baker Bros. Advisors, Mark Lampert’s Biotechnology Value Fund / BVF Inc and Phill Gross and Robert Atchinson’s Adage Capital Management. In terms of the portfolio weights assigned to each position Samsara BioCapital allocated the biggest weight to Principia Biopharma Inc. (NASDAQ:PRNB), around 8.05% of its 13F portfolio. Biotechnology Value Fund / BVF Inc is also relatively very bullish on the stock, dishing out 7.13 percent of its 13F equity portfolio to PRNB.

With a general bullishness amongst the heavyweights, key money managers were breaking ground themselves. Biotechnology Value Fund / BVF Inc, managed by Mark Lampert, initiated the largest position in Principia Biopharma Inc. (NASDAQ:PRNB). Biotechnology Value Fund / BVF Inc had $94 million invested in the company at the end of the quarter. Farallon Capital also made a $21.9 million investment in the stock during the quarter. The other funds with new positions in the stock are Renaissance Technologies, Cliff Asness’s AQR Capital Management, and Vishal Saluja and Pham Quang’s Endurant Capital Management.

As you can see these stocks had an average of 23 hedge funds with bullish positions and the average amount invested in these stocks was $425 million. That figure was $556 million in PRNB’s case. Skyline Champion Corporation (NYSE:SKY) is the most popular stock in this table. On the other hand Masonite International Corp (NYSE:DOOR) is the least popular one with only 21 bullish hedge fund positions. Compared to these stocks Principia Biopharma Inc. (NASDAQ:PRNB) is even less popular than DOOR. Hedge funds clearly dropped the ball on PRNB as the stock delivered strong returns, though hedge funds’ consensus picks still generated respectable returns. Our calculations showed that top 20 most popular stocks among hedge funds returned 41.3% in 2019 and outperformed the S&P 500 ETF (SPY) by 10.1 percentage points. These stocks lost 13.0% in 2020 through April 6th but still beat the market by 4.2 percentage points. A small number of hedge funds were also right about betting on PRNB as the stock returned 5.8% during the same time period and outperformed the market by an even larger margin.