Does LKQ Corporation (NASDAQ:LKQ) represent a good buying opportunity at the moment? Let’s briefly check the hedge fund interest towards the company. Hedge fund firms constantly search out bright intellectuals and highly-experienced employees and throw away millions of dollars on satellite photos and other research activities, so it is no wonder why they tend to generate millions in profits each year. It is also true that some hedge fund players fail inconceivably on some occasions, but net net their stock picks have been generating superior risk-adjusted returns on average over the years.

LKQ Corporation (NASDAQ:LKQ) has seen a decrease in activity from the world’s largest hedge funds of late, though overall hedge fund sentiment towards the stock is still near its all time high which was reached at the end of September. This is usually a bullish sign. For example hedge fund sentiment in Xilinx Inc. (XLNX) was also at its all time high at the beginning of this year and the stock returned more than 46% in 2.5 months. We observed similar performances from Twilio, MSCI and Progressive Corporation (PGR); these stocks returned 37%, 29% and 27% respectively. Hedge fund sentiment towards IQVIA Holdings Inc. (IQV), Brookfield Asset Management Inc. (BAM), Atlassian Corporation Plc (TEAM), RCL, MTB, VAR and CRH hit all time highs at the end of December, and all of these stocks returned more than 20% in the first 2.5 months of this year.

What does the smart money think about LKQ Corporation (NASDAQ:LKQ)? 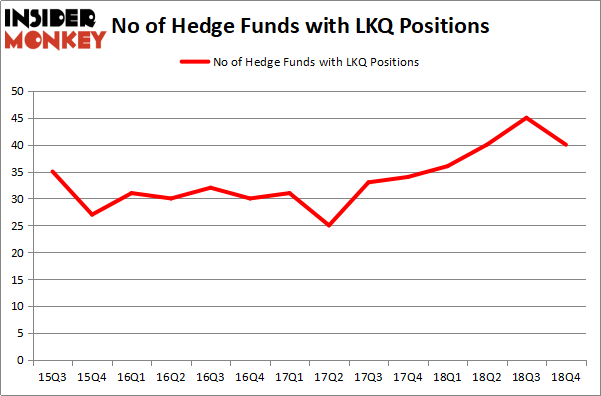 More specifically, Hound Partners was the largest shareholder of LKQ Corporation (NASDAQ:LKQ), with a stake worth $140.5 million reported as of the end of September. Trailing Hound Partners was Steadfast Capital Management, which amassed a stake valued at $112.7 million. Park Presidio Capital, Atalan Capital, and Park West Asset Management were also very fond of the stock, giving the stock large weights in their portfolios.

Seeing as LKQ Corporation (NASDAQ:LKQ) has faced declining sentiment from the entirety of the hedge funds we track, it’s safe to say that there was a specific group of hedgies who sold off their positions entirely in the third quarter. At the top of the heap, Christopher James’s Partner Fund Management sold off the largest investment of the 700 funds followed by Insider Monkey, valued at close to $43.7 million in stock. Paul Marshall and Ian Wace’s fund, Marshall Wace LLP, also said goodbye to its stock, about $42.4 million worth. These bearish behaviors are interesting, as total hedge fund interest was cut by 5 funds in the third quarter.

As you can see these stocks had an average of 18.75 hedge funds with bullish positions and the average amount invested in these stocks was $348 million. That figure was $878 million in LKQ’s case. Bunge Limited (NYSE:BG) is the most popular stock in this table. On the other hand CPFL Energia S.A. (NYSE:CPL) is the least popular one with only 2 bullish hedge fund positions. Compared to these stocks LKQ Corporation (NASDAQ:LKQ) is more popular among hedge funds. Our calculations showed that top 15 most popular stocks among hedge funds returned 21.3% through April 8th and outperformed the S&P 500 ETF (SPY) by more than 5 percentage points. Hedge funds were also right about betting on LKQ as the stock returned 27.2% and outperformed the market as well.