In these volatile markets we scrutinize hedge fund filings to get a reading on which direction each stock might be going. Keeping this in mind let’s see whether Mondelez International Inc (NASDAQ:MDLZ) represents a good buying opportunity at the moment. Let’s quickly check the hedge fund interest towards the company. Hedge fund firms constantly search out bright intellectuals and highly-experienced employees and throw away millions of dollars on satellite photos and other research activities, so it is no wonder why they tend to generate millions in profits each year. It is also true that some hedge fund players fail inconceivably on some occasions, but net net their stock picks have been generating superior risk-adjusted returns on average over the years.

Is Mondelez International Inc (NASDAQ:MDLZ) a bargain? The best stock pickers are becoming less hopeful. The number of bullish hedge fund positions dropped by 6 in recent months. Our calculations also showed that MDLZ isn’t among the 30 most popular stocks among hedge funds (click for Q4 rankings and see the video at the end of this article for Q3 rankings). MDLZ was in 50 hedge funds’ portfolios at the end of the fourth quarter of 2019. There were 56 hedge funds in our database with MDLZ positions at the end of the previous quarter.

At Q4’s end, a total of 50 of the hedge funds tracked by Insider Monkey held long positions in this stock, a change of -11% from one quarter earlier. By comparison, 45 hedge funds held shares or bullish call options in MDLZ a year ago. With the smart money’s sentiment swirling, there exists a few noteworthy hedge fund managers who were adding to their holdings significantly (or already accumulated large positions). 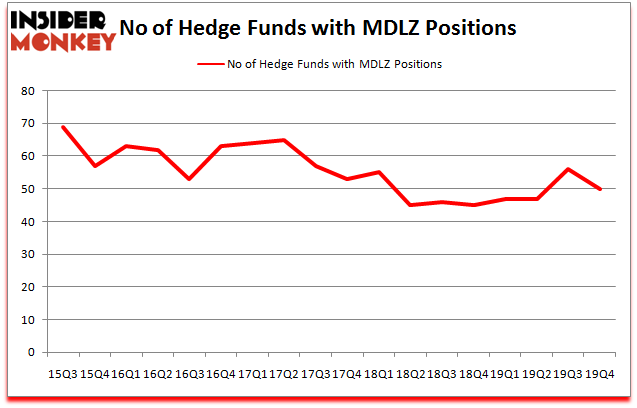 Among these funds, Trian Partners held the most valuable stake in Mondelez International Inc (NASDAQ:MDLZ), which was worth $1037.1 million at the end of the third quarter. On the second spot was D E Shaw which amassed $147.7 million worth of shares. Hillhouse Capital Management, Point72 Asset Management, and GAMCO Investors were also very fond of the stock, becoming one of the largest hedge fund holders of the company. In terms of the portfolio weights assigned to each position Trian Partners allocated the biggest weight to Mondelez International Inc (NASDAQ:MDLZ), around 10.93% of its 13F portfolio. Kehrs Ridge Capital is also relatively very bullish on the stock, designating 5.32 percent of its 13F equity portfolio to MDLZ.

Because Mondelez International Inc (NASDAQ:MDLZ) has experienced a decline in interest from the entirety of the hedge funds we track, we can see that there exists a select few funds that elected to cut their full holdings in the third quarter. At the top of the heap, Ricky Sandler’s Eminence Capital dumped the largest investment of all the hedgies watched by Insider Monkey, valued at an estimated $54.9 million in stock. Ryan Tolkin (CIO)’s fund, Schonfeld Strategic Advisors, also sold off its stock, about $12.2 million worth. These transactions are important to note, as total hedge fund interest dropped by 6 funds in the third quarter.

As you can see these stocks had an average of 58.75 hedge funds with bullish positions and the average amount invested in these stocks was $2690 million. That figure was $2343 million in MDLZ’s case. Fiserv, Inc. (NASDAQ:FISV) is the most popular stock in this table. On the other hand Stryker Corporation (NYSE:SYK) is the least popular one with only 43 bullish hedge fund positions. Mondelez International Inc (NASDAQ:MDLZ) is not the least popular stock in this group but hedge fund interest is still below average. Our calculations showed that top 10 most popular stocks among hedge funds returned 41.4% in 2019 and outperformed the S&P 500 ETF (SPY) by 10.1 percentage points. These stocks gained 1.0% in 2020 through May 1st but beat the market by 12.9 percentage points. A small number of hedge funds were also right about betting on MDLZ, though not to the same extent, as the stock returned -7.4% during the same time period and outperformed the market.