In these volatile markets we scrutinize hedge fund filings to get a reading on which direction each stock might be going. The 800+ hedge funds and famous money managers tracked by Insider Monkey have already compiled and submitted their 13F filings for the fourth quarter, which unveil their equity positions as of December 31. We went through these filings, fixed typos and other more significant errors and identified the changes in hedge fund portfolios. Our extensive review of these public filings is finally over, so this article is set to reveal the smart money sentiment towards Marathon Petroleum Corp (NYSE:MPC).

Is Marathon Petroleum Corp (NYSE:MPC) a superb investment today? Investors who are in the know are taking an optimistic view. The number of bullish hedge fund bets moved up by 1 recently. Our calculations also showed that MPC isn’t among the 30 most popular stocks among hedge funds (click for Q4 rankings and see the video at the end of this article for Q3 rankings).

We leave no stone unturned when looking for the next great investment idea. For example, this trader is claiming triple digit returns, so we check out his latest trade recommendations. Federal Reserve and Central Banks all around world are printing money like there is no tomorrow, so we check out this this precious metals expert’s stock pick. We read hedge fund investor letters and listen to stock pitches at hedge fund conferences (by the way watch this video if you want to hear one of the best healthcare hedge fund manager’s coronavirus analysis). Our best call in 2020 was shorting the market when S&P 500 was trading at 3150 after realizing the coronavirus pandemic’s significance before most investors. Keeping this in mind let’s take a gander at the new hedge fund action regarding Marathon Petroleum Corp (NYSE:MPC). 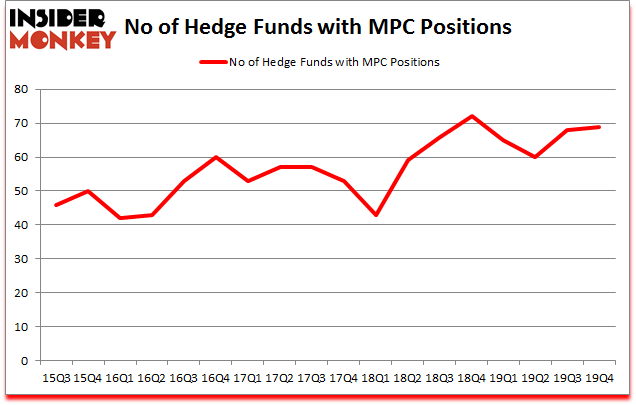 When looking at the institutional investors followed by Insider Monkey, Paul Singer’s Elliott Management has the largest position in Marathon Petroleum Corp (NYSE:MPC), worth close to $581.3 million, accounting for 4.9% of its total 13F portfolio. On Elliott Management’s heels is D E Shaw, managed by D. E. Shaw, which holds a $314.9 million call position; 0.4% of its 13F portfolio is allocated to the company. Remaining professional money managers with similar optimism include Robert Pitts’s Steadfast Capital Management, David Cohen and Harold Levy’s Iridian Asset Management and Israel Englander’s Millennium Management. In terms of the portfolio weights assigned to each position Swift Run Capital Management allocated the biggest weight to Marathon Petroleum Corp (NYSE:MPC), around 10.83% of its 13F portfolio. Swift Run Capital Management is also relatively very bullish on the stock, designating 5.13 percent of its 13F equity portfolio to MPC.

Consequently, some big names were breaking ground themselves. Renaissance Technologies, created the most outsized position in Marathon Petroleum Corp (NYSE:MPC). Renaissance Technologies had $144.1 million invested in the company at the end of the quarter. Stanley Druckenmiller’s Duquesne Capital also initiated a $44.3 million position during the quarter. The other funds with new positions in the stock are Paul Tudor Jones’s Tudor Investment Corp, Anand Parekh’s Alyeska Investment Group, and Frank Brosens’s Taconic Capital.

Let’s go over hedge fund activity in other stocks – not necessarily in the same industry as Marathon Petroleum Corp (NYSE:MPC) but similarly valued. We will take a look at The Royal Bank of Scotland Group plc (NYSE:RBS), AFLAC Incorporated (NYSE:AFL), Orange S.A. (NYSE:ORAN), and Valero Energy Corporation (NYSE:VLO). All of these stocks’ market caps are closest to MPC’s market cap.

As you can see these stocks had an average of 21.25 hedge funds with bullish positions and the average amount invested in these stocks was $296 million. That figure was $2759 million in MPC’s case. Valero Energy Corporation (NYSE:VLO) is the most popular stock in this table. On the other hand Orange S.A. (NYSE:ORAN) is the least popular one with only 2 bullish hedge fund positions. Compared to these stocks Marathon Petroleum Corp (NYSE:MPC) is more popular among hedge funds. Our calculations showed that top 10 most popular stocks among hedge funds returned 41.4% in 2019 and outperformed the S&P 500 ETF (SPY) by 10.1 percentage points. These stocks lost 1.0% in 2020 through April 20th and still beat the market by 11 percentage points. Unfortunately MPC wasn’t nearly as popular as these 10 stocks and hedge funds that were betting on MPC were disappointed as the stock returned -58.3% during the three months of 2020 (through April 20th) and underperformed the market. If you are interested in investing in large cap stocks with huge upside potential, you should check out the top 10 most popular stocks among hedge funds as most of these stocks already outperformed the market in 2020.