Were Hedge Funds Right About Jumping Into Pool Corporation (POOL)?

Pool Corporation (NASDAQ:POOL) has experienced an increase in activity from the world’s largest hedge funds lately. Our calculations also showed that POOL isn’t among the 30 most popular stocks among hedge funds (see the video below). 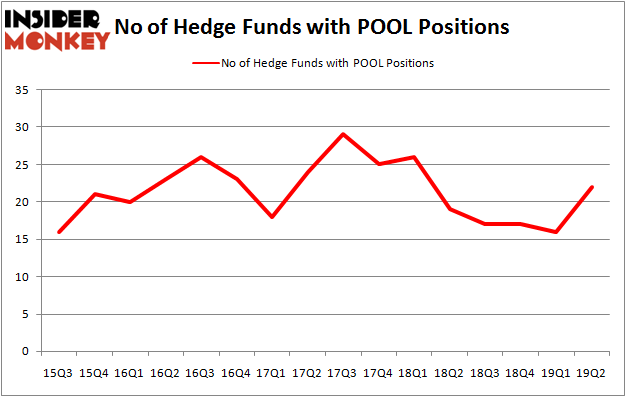 Unlike this former hedge fund manager who is convinced Dow will soar past 40000, our long-short investment strategy doesn’t rely on bull markets to deliver double digit returns. We only rely on hedge fund buy/sell signals. We’re going to take a look at the fresh hedge fund action surrounding Pool Corporation (NASDAQ:POOL).

As you can see these stocks had an average of 25.75 hedge funds with bullish positions and the average amount invested in these stocks was $623 million. That figure was $342 million in POOL’s case. Etsy Inc (NASDAQ:ETSY) is the most popular stock in this table. On the other hand Liberty Property Trust (NYSE:LPT) is the least popular one with only 19 bullish hedge fund positions. Pool Corporation (NASDAQ:POOL) is not the least popular stock in this group but hedge fund interest is still below average. Our calculations showed that top 20 most popular stocks among hedge funds returned 24.4% in 2019 through September 30th and outperformed the S&P 500 ETF (SPY) by 4 percentage points. A small number of hedge funds were also right about betting on POOL as the stock returned 5.9% during the same time frame and outperformed the market by an even larger margin.