It was a rough fourth quarter for many hedge funds, which were naturally unable to overcome the big dip in the broad market, as the S&P 500 fell by about 4.8% during 2018 and average hedge fund losing about 1%. The Russell 2000, composed of smaller companies, performed even worse, trailing the S&P by more than 6 percentage points, as investors fled less-known quantities for safe havens. This was the case with hedge funds, who we heard were pulling money from the market amid the volatility, which included money from small-cap stocks, which they invest in at a higher rate than other investors. This action contributed to the greater decline in these stocks during the tumultuous period. We will study how this market volatility affected their sentiment towards Intel Corporation (NASDAQ:INTC) during the quarter below.

Is Intel Corporation (NASDAQ:INTC) ready to rally soon? Hedge funds are turning bullish. The number of bullish hedge fund bets advanced by 7 lately. Our calculations also showed that INTC isn’t among the 30 most popular stocks among hedge funds. INTC was in 65 hedge funds’ portfolios at the end of December. There were 58 hedge funds in our database with INTC positions at the end of the previous quarter.

To most stock holders, hedge funds are seen as slow, old financial tools of the past. While there are over 8000 funds with their doors open at present, Our researchers hone in on the elite of this club, about 750 funds. These money managers command most of all hedge funds’ total asset base, and by following their first-class picks, Insider Monkey has determined many investment strategies that have historically defeated the broader indices. Insider Monkey’s flagship hedge fund strategy outpaced the S&P 500 index by nearly 5 percentage points per annum since its inception in May 2014 through early November 2018. We were able to generate large returns even by identifying short candidates. Our portfolio of short stocks lost 27.5% since February 2017 (through March 12th) even though the market was up nearly 25% during the same period. We just shared a list of 6 short targets in our latest quarterly update and they are already down an average of 6% in less than a month.

At Q4’s end, a total of 65 of the hedge funds tracked by Insider Monkey were bullish on this stock, a change of 12% from one quarter earlier. The graph below displays the number of hedge funds with bullish position in INTC over the last 14 quarters. With hedge funds’ positions undergoing their usual ebb and flow, there exists an “upper tier” of key hedge fund managers who were boosting their stakes considerably (or already accumulated large positions). 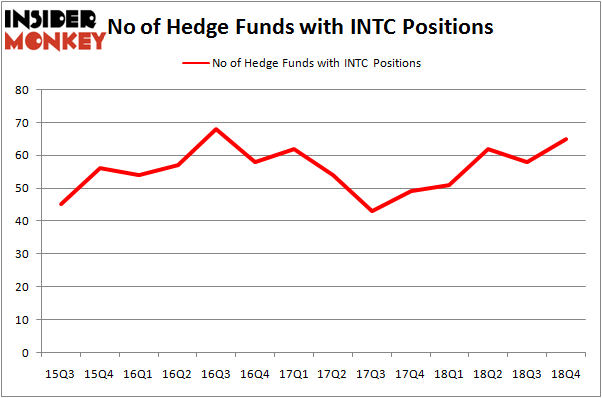 Among these funds, Fisher Asset Management held the most valuable stake in Intel Corporation (NASDAQ:INTC), which was worth $1171.3 million at the end of the third quarter. On the second spot was AQR Capital Management which amassed $852.7 million worth of shares. Moreover, Arrowstreet Capital, Two Sigma Advisors, and D E Shaw were also bullish on Intel Corporation (NASDAQ:INTC), allocating a large percentage of their portfolios to this stock.

As aggregate interest increased, specific money managers were breaking ground themselves. Cavalry Asset Management, managed by John Hurley, initiated the most valuable position in Intel Corporation (NASDAQ:INTC). Cavalry Asset Management had $34.4 million invested in the company at the end of the quarter. Michael Kharitonov and Jon David McAuliffe’s Voleon Capital also made a $32.6 million investment in the stock during the quarter. The other funds with new positions in the stock are Clint Carlson’s Carlson Capital, Steve Cohen’s Point72 Asset Management, and Brandon Haley’s Holocene Advisors.

Let’s now take a look at hedge fund activity in other stocks similar to Intel Corporation (NASDAQ:INTC). We will take a look at Mastercard Incorporated (NYSE:MA), Chevron Corporation (NYSE:CVX), AT&T Inc. (NYSE:T), and The Coca-Cola Company (NYSE:KO). This group of stocks’ market caps are closest to INTC’s market cap.

As you can see these stocks had an average of 63.25 hedge funds with bullish positions and the average amount invested in these stocks was $8486 million. That figure was $5188 million in INTC’s case. Mastercard Incorporated (NYSE:MA) is the most popular stock in this table. On the other hand Chevron Corporation (NYSE:CVX) is the least popular one with only 48 bullish hedge fund positions. Intel Corporation (NASDAQ:INTC) is not the most popular stock in this group but hedge fund interest is still above average. Our calculations showed that top 15 most popular stocks among hedge funds returned 19.7% through March 15th and outperformed the S&P 500 ETF (SPY) by 6.6 percentage points. Hedge funds were also right about betting on Intel as the stock returned 16.5% and outperformed the market as well.