We at Insider Monkey have gone over 700 13F filings that hedge funds and prominent investors are required to file by the SEC. The 13F filings show the funds’ and investors’ portfolio positions as of December 31st. In this article we look at what those investors think of Franklin Resources, Inc. (NYSE:BEN).

Is Franklin Resources, Inc. (NYSE:BEN) a buy right now? Money managers are becoming less confident. The number of long hedge fund bets retreated by 1 in recent months. Our calculations also showed that BEN isn’t among the 30 most popular stocks among hedge funds. BEN was in 28 hedge funds’ portfolios at the end of the fourth quarter of 2018. There were 29 hedge funds in our database with BEN positions at the end of the previous quarter.

How have hedgies been trading Franklin Resources, Inc. (NYSE:BEN)?

Heading into the first quarter of 2019, a total of 28 of the hedge funds tracked by Insider Monkey were long this stock, a change of -3% from one quarter earlier. Below, you can check out the change in hedge fund sentiment towards BEN over the last 14 quarters. So, let’s see which hedge funds were among the top holders of the stock and which hedge funds were making big moves. 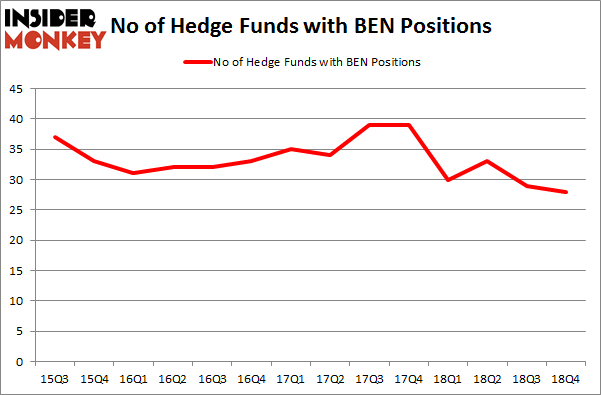 Seeing as Franklin Resources, Inc. (NYSE:BEN) has faced a decline in interest from hedge fund managers, it’s safe to say that there were a few money managers that slashed their full holdings last quarter. Intriguingly, Matthew Hulsizer’s PEAK6 Capital Management dropped the biggest investment of the “upper crust” of funds tracked by Insider Monkey, valued at about $2.2 million in stock. Ben Levine, Andrew Manuel and Stefan Renold’s fund, LMR Partners, also cut its stock, about $0.4 million worth. These transactions are important to note, as aggregate hedge fund interest dropped by 1 funds last quarter.

As you can see these stocks had an average of 29.5 hedge funds with bullish positions and the average amount invested in these stocks was $978 million. That figure was $817 million in BEN’s case. BioMarin Pharmaceutical Inc. (NASDAQ:BMRN) is the most popular stock in this table. On the other hand NetApp Inc. (NASDAQ:NTAP) is the least popular one with only 21 bullish hedge fund positions. Franklin Resources, Inc. (NYSE:BEN) is not the least popular stock in this group but hedge fund interest is still below average. This is a slightly negative signal and we’d rather spend our time researching stocks that hedge funds are piling on.Our calculations showed that top 15 most popular stocks among hedge funds returned 19.7% through March 15th and outperformed the S&P 500 ETF (SPY) by 6.6 percentage points. Unfortunately BEN wasn’t in this group. Hedge funds that bet on BEN were disappointed as the stock returned 12.3% and underperformed the market. If you are interested in investing in large cap stocks, you should check out the top 15 hedge fund stocks as 13 of these outperformed the market.