Were Hedge Funds Right About Flocking Into Huntsman Corporation (HUN) ?

Is Huntsman Corporation (NYSE:HUN) a good investment right now? We check hedge fund and billionaire investor sentiment before delving into hours of research. Hedge funds spend millions of dollars on Ivy League graduates, expert networks, and get tips from investment bankers and industry insiders. Sure they sometimes fail miserably, but their consensus stock picks historically outperformed the market after adjusting for known risk factors.

Is Huntsman Corporation (NYSE:HUN) the right investment to pursue these days? Prominent investors are buying. The number of long hedge fund bets rose by 9 recently. Our calculations also showed that HUN isn’t among the 30 most popular stocks among hedge funds. HUN was in 35 hedge funds’ portfolios at the end of March. There were 26 hedge funds in our database with HUN holdings at the end of the previous quarter.

According to most market participants, hedge funds are viewed as slow, outdated investment tools of years past. While there are over 8000 funds trading at present, We hone in on the crème de la crème of this group, around 750 funds. These investment experts shepherd the lion’s share of the hedge fund industry’s total asset base, and by tailing their unrivaled equity investments, Insider Monkey has discovered several investment strategies that have historically beaten the S&P 500 index. Insider Monkey’s flagship hedge fund strategy outstripped the S&P 500 index by around 5 percentage points annually since its inception in May 2014 through the end of May. We were able to generate large returns even by identifying short candidates. Our portfolio of short stocks lost 30.9% since February 2017 (through May 30th) even though the market was up nearly 24% during the same period. We just shared a list of 5 short targets in our latest quarterly update and they are already down an average of 11.9% in less than a couple of weeks whereas our long picks outperformed the market by 2 percentage points in this volatile 2 week period. 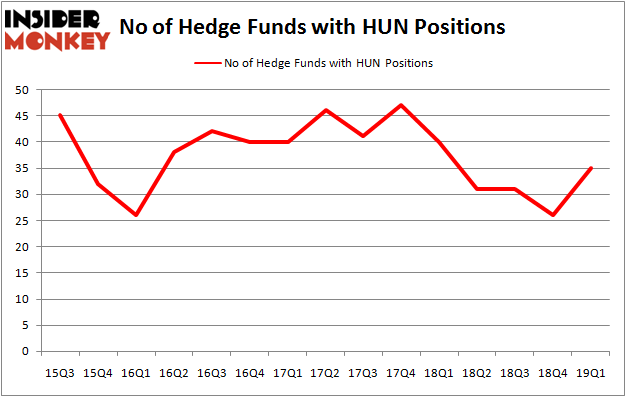 According to publicly available hedge fund and institutional investor holdings data compiled by Insider Monkey, Two Sigma Advisors, managed by John Overdeck and David Siegel, holds the biggest position in Huntsman Corporation (NYSE:HUN). Two Sigma Advisors has a $69.6 million position in the stock, comprising 0.2% of its 13F portfolio. The second largest stake is held by Alexander Roepers of Atlantic Investment Management, with a $56.1 million position; the fund has 14.3% of its 13F portfolio invested in the stock. Some other members of the smart money with similar optimism consist of Chuck Royce’s Royce & Associates, Ken Griffin’s Citadel Investment Group and Cliff Asness’s AQR Capital Management.

As you can see these stocks had an average of 24 hedge funds with bullish positions and the average amount invested in these stocks was $632 million. That figure was $470 million in HUN’s case. W.R. Grace & Co. (NYSE:GRA) is the most popular stock in this table. On the other hand Buckeye Partners, L.P. (NYSE:BPL) is the least popular one with only 5 bullish hedge fund positions. Huntsman Corporation (NYSE:HUN) is not the most popular stock in this group but hedge fund interest is still above average. This is a slightly positive signal but we’d rather spend our time researching stocks that hedge funds are piling on. Our calculations showed that top 20 most popular stocks among hedge funds returned 1.9% in Q2 through May 30th and outperformed the S&P 500 ETF (SPY) by more than 3 percentage points. Unfortunately HUN wasn’t nearly as popular as these 20 stocks and hedge funds that were betting on HUN were disappointed as the stock returned -18.9% during the same period and underperformed the market. If you are interested in investing in large cap stocks with huge upside potential, you should check out the top 20 most popular stocks among hedge funds as 13 of these stocks already outperformed the market so far in Q2.