Huntsman Corporation (HUN): Alex Roepers Loves It, Other Hedge Funds Not So Much

Value has performed relatively poorly since the 2017 shift, but we believe challenges to the S&P 500’s dominance are mounting and resulting active opportunities away from the index are growing. At some point, this fault line will break, likely on the back of rising rates, and all investors will be reminded that the best time to diversify away from the winners is when it is most painful. The bargain of capturing long-term value may be short-term pain, but enough is eventually enough and it comes time to harvest the benefits,” said Clearbridge Investments in its market commentary. We aren’t sure whether long-term interest rates will top 5% and value stocks outperform growth, but we follow hedge fund investor letters to understand where the markets and stocks might be going. That’s why we believe it would be worthwhile to take a look at the hedge fund sentiment on Huntsman Corporation (NYSE:HUN) in order to identify whether reputable and successful top money managers continue to believe in its potential.

31 hedge funds in our database owned Huntsman Corporation (NYSE:HUN) on June 30, one of which was Atlantic Investment Management. That fund’s portfolio manager Alexander Roepers is a firm believer in Huntsman, pitching the stock at two prominent investor conferences over the past few months. However, hedge funds as a whole have been selling out of the stock for the past two quarters, as 46 funds had owned it at the beginning of the year. Of the filings that have come in for the September 30 reporting period, two more funds (Cerebellum Capital and Perella Weinberg Partners’ Xerion strategy) have decided to sell Huntsman as well, while one fund (Signition LP) opened a new position. On the other hand, Huntsman’s insiders are showing more confidence in the stock, as it landed on our countdown of The 25 Biggest Insider Purchases in October.

To most investors, hedge funds are seen as unimportant, old financial vehicles of years past. While there are greater than 8,000 funds in operation at the moment, our experts choose to focus on the moguls of this club, approximately 700 funds. These investment experts command the majority of the hedge fund industry’s total capital, and by shadowing their matchless stock picks, Insider Monkey has identified several investment strategies that have historically defeated Mr. Market. Insider Monkey’s small-cap hedge fund strategy outran the S&P 500 index by 12 percentage points a year for a decade in their back tests.

How have hedgies been trading Huntsman Corporation (NYSE:HUN)? 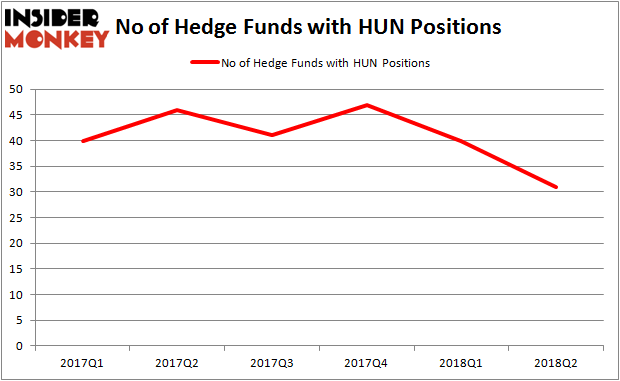 Because Huntsman Corporation (NYSE:HUN) has experienced falling interest from the aggregate hedge fund industry, logic holds that there was a specific group of hedge funds who were dropping their full holdings by the end of the second quarter. At the top of the heap, Charles Davidson and Joseph Jacobs’ Wexford Capital dumped the biggest position of the “upper crust” of funds followed by Insider Monkey, worth an estimated $14.4 million in stock. Ernest Chow and Jonathan Howe’s fund, Sensato Capital Management, also cut its stock, about $9.6 million worth. These bearish behaviors are intriguing to say the least, as total hedge fund interest fell by 9 funds by the end of the second quarter.

Let’s now take a look at hedge fund activity in other stocks – not necessarily in the same industry as Huntsman Corporation (NYSE:HUN) but similarly valued. These stocks are AMERCO (NASDAQ:UHAL), Helmerich & Payne, Inc. (NYSE:HP) and Cullen/Frost Bankers, Inc. (NYSE:CFR). All of these stocks’ market caps match HUN’s market cap.

As you can see these stocks had an average of 18 hedge funds with bullish positions and the average amount invested in these stocks was $305 million. That figure was $932 million in HUN’s case. Helmerich & Payne, Inc. (NYSE:HP) is the most popular stock in this table. On the other hand UHAL is the least popular one with only 8 bullish hedge fund positions. Compared to these stocks Huntsman Corporation (NYSE:HUN) is more popular among hedge funds. Considering that hedge funds are fond of this stock and insiders are also buying it, it may be a good idea to analyze it in detail and potentially include it in your portfolio.