How have hedgies been trading Rio Tinto Group (NYSE:RIO)?

At Q4’s end, a total of 23 of the hedge funds tracked by Insider Monkey were long this stock, a change of 15% from the second quarter of 2018. On the other hand, there were a total of 18 hedge funds with a bullish position in RIO a year ago. With hedgies’ capital changing hands, there exists a select group of notable hedge fund managers who were boosting their stakes meaningfully (or already accumulated large positions). 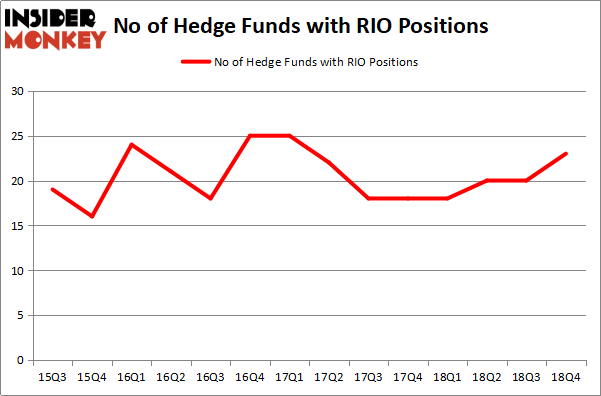 Of the funds tracked by Insider Monkey, Fisher Asset Management, managed by Ken Fisher, holds the largest position in Rio Tinto Group (NYSE:RIO). Fisher Asset Management has a $459.9 million position in the stock, comprising 0.6% of its 13F portfolio. The second most bullish fund manager is Arrowstreet Capital, led by Peter Rathjens, Bruce Clarke and John Campbell, holding a $307.6 million position; the fund has 0.8% of its 13F portfolio invested in the stock. Other peers with similar optimism include Robert Bishop’s Impala Asset Management, John Overdeck and David Siegel’s Two Sigma Advisors and Jacob Doft’s Highline Capital Management.

As you can see these stocks had an average of 47.5 hedge funds with bullish positions and the average amount invested in these stocks was $6196 million. That figure was $1143 million in RIO’s case. Gilead Sciences, Inc. (NASDAQ:GILD) is the most popular stock in this table. On the other hand NVIDIA Corporation (NASDAQ:NVDA) is the least popular one with only 41 bullish hedge fund positions. Compared to these stocks Rio Tinto Group (NYSE:RIO) is even less popular than NVDA, however the hedge fund sentiment started to improve in December as some hedge funds saw an opportunity to snap up cheap shares. Our calculations showed that top 15 most popular stocks among hedge funds returned 19.7% through March 15th and outperformed the S&P 500 ETF (SPY) by 6.6 percentage points. Hedge funds were also right about betting on RIO as the stock returned 24.4% and outperformed the market as well.

Hedge Funds Have Never Been This Bullish On Thermo Fisher Scientific Inc. (...
Monthly Newsletter Strategy
Download a free copy of our newsletter and see the details inside!
Hedge Fund Resource Center
Related News
Should You Buy Rio Tinto plc (RIO)? Is Rio Tinto (RIO) A Hidden Gem or a Chunk of Coal? Billionaire Ken Fisher is Bullish About These Dividend Stocks Five Uranium Stocks to Buy According to Hedge Funds Do Hedge Funds Love Rio Tinto plc (ADR) (RIO)? Why Are These Five Stocks on the Move Today? Netflix, Rio Tinto, and Exxon Mobil Among 5 Stocks Making Waves Today Ten of the Most Common Addictions 13 African Countries with the Largest White Population in 2018 6 Causes of Human Trafficking in Africa, India, and US
Billionaire Hedge Funds