Is Anheuser-Busch InBev SA/NV (NYSE:BUD) a good bet right now? We like to analyze hedge fund sentiment before doing days of in-depth research. We do so because hedge funds and other elite investors have numerous Ivy League graduates, expert network advisers, and supply chain tipsters working or consulting for them. There is not a shortage of news stories covering failed hedge fund investments and it is a fact that hedge funds’ picks don’t beat the market 100% of the time, but their consensus picks have historically done very well and have outperformed the market after adjusting for risk.

Anheuser-Busch InBev SA/NV (NYSE:BUD) was in 21 hedge funds’ portfolios at the end of December. BUD has experienced an increase in hedge fund sentiment of late. There were 20 hedge funds in our database with BUD holdings at the end of the previous quarter. Our calculations also showed that BUD isn’t among the 30 most popular stocks among hedge funds.

Heading into the first quarter of 2019, a total of 21 of the hedge funds tracked by Insider Monkey held long positions in this stock, a change of 5% from the second quarter of 2018. The graph below displays the number of hedge funds with bullish position in BUD over the last 14 quarters. With the smart money’s positions undergoing their usual ebb and flow, there exists a few noteworthy hedge fund managers who were upping their stakes considerably (or already accumulated large positions). 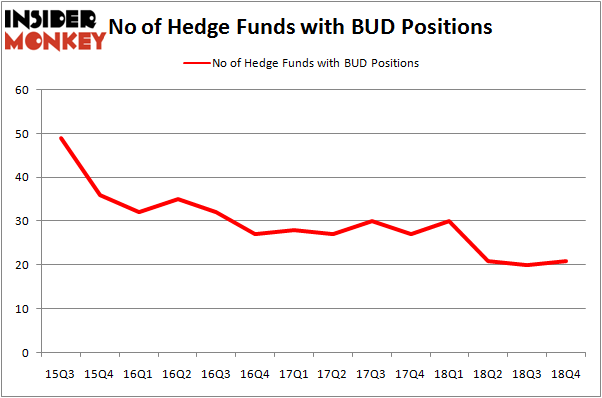 Among these funds, Gardner Russo & Gardner held the most valuable stake in Anheuser-Busch InBev SA/NV (NYSE:BUD), which was worth $514.5 million at the end of the third quarter. On the second spot was Fisher Asset Management which amassed $416.1 million worth of shares. Moreover, Alkeon Capital Management, Maverick Capital, and Renaissance Technologies were also bullish on Anheuser-Busch InBev SA/NV (NYSE:BUD), allocating a large percentage of their portfolios to this stock.

As you can see these stocks had an average of 55.25 hedge funds with bullish positions and the average amount invested in these stocks was $3700 million. That figure was $1133 million in BUD’s case. Citigroup Inc. (NYSE:C) is the most popular stock in this table. On the other hand BP plc (NYSE:BP) is the least popular one with only 34 bullish hedge fund positions. Compared to these stocks Anheuser-Busch InBev SA/NV (NYSE:BUD) is even less popular than BP but hedge fund sentiment started to increase last quarter. Our calculations showed that top 15 most popular stocks among hedge funds returned 19.7% through March 15th and outperformed the S&P 500 ETF (SPY) by 6.6 percentage points. Hedge funds were also right about betting on BUD as the stock returned 23.5% and outperformed the market as well.

Were Hedge Funds Right About The Coca-Cola Company (KO)?
Monthly Newsletter Strategy
Download a free copy of our newsletter and see the details inside!
Hedge Fund Resource Center
Related News
4 Stocks Billionaire Andreas Halvorsen Bought in Q3 (and 1 He Dumped) Should You Avoid Anheuser-Busch InBev SA/NV (BUD)? Hedge Funds Bail On Anheuser-Busch InBev NV (BUD) As Trump’s Tariffs Sting and Debt Piles Up Billionaire Ken Fisher is Bullish About These Dividend Stocks 10 Biggest Advertisers in the World Top Selling Beers in America in 2018 Trump’s Steel and Aluminum Tariffs Will Hurt These 5 Stocks Ten of the Most Common Addictions 13 African Countries with the Largest White Population in 2018 6 Causes of Human Trafficking in Africa, India, and US
Billionaire Hedge Funds