Hedge funds don’t get the respect they used to get. Nowadays investors prefer passive funds over actively managed funds. One thing they don’t realize is that 100% of the passive funds didn’t see the coronavirus recession coming, but a lot of hedge funds did. Even we published an article near the end of February and predicted a US recession. Think about all the losses you could have avoided if you sold your shares in February and bought them back at the end of March. Keeping this in mind let’s see whether Kearny Financial Corp. (NASDAQ:KRNY) represents a good buying opportunity at the moment.

Is Kearny Financial Corp. (NASDAQ:KRNY) a cheap investment right now? The smart money is becoming more confident. The number of bullish hedge fund positions increased by 5 in recent months. Our calculations also showed that KRNY isn’t among the 30 most popular stocks among hedge funds (click for Q4 rankings and see the video at the end of this article for Q3 rankings). KRNY was in 21 hedge funds’ portfolios at the end of the fourth quarter of 2019. There were 16 hedge funds in our database with KRNY holdings at the end of the previous quarter.

If you’d ask most traders, hedge funds are assumed to be underperforming, outdated investment tools of the past. While there are greater than 8000 funds trading today, We look at the top tier of this group, approximately 850 funds. Most estimates calculate that this group of people direct bulk of the hedge fund industry’s total capital, and by following their highest performing investments, Insider Monkey has come up with numerous investment strategies that have historically outrun the broader indices. Insider Monkey’s flagship short hedge fund strategy exceeded the S&P 500 short ETFs by around 20 percentage points a year since its inception in March 2017. Our portfolio of short stocks lost 35.3% since February 2017 (through March 3rd) even though the market was up more than 35% during the same period. We just shared a list of 7 short targets in our latest quarterly update .

We leave no stone unturned when looking for the next great investment idea. For example, this investor can predict short term winners following earnings announcements with 77% accuracy, so we check out his stock picks. A former hedge fund manager is pitching the “next Amazon” in this video; again we are listening. We read hedge fund investor letters and listen to stock pitches at hedge fund conferences. Our best call in 2020 was shorting the market when S&P 500 was trading at 3150 after realizing the coronavirus pandemic’s significance before most investors. Now we’re going to review the key hedge fund action regarding Kearny Financial Corp. (NASDAQ:KRNY).

What does smart money think about Kearny Financial Corp. (NASDAQ:KRNY)? 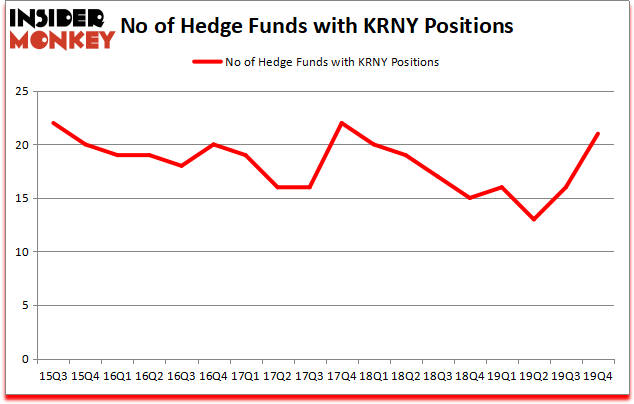 According to publicly available hedge fund and institutional investor holdings data compiled by Insider Monkey, Renaissance Technologies has the biggest position in Kearny Financial Corp. (NASDAQ:KRNY), worth close to $88.3 million, accounting for 0.1% of its total 13F portfolio. Sitting at the No. 2 spot is Driehaus Capital, led by Richard Driehaus, holding a $7.7 million position; the fund has 0.2% of its 13F portfolio invested in the stock. Remaining hedge funds and institutional investors that are bullish encompass Frederick DiSanto’s Ancora Advisors, Tim Mullen’s Swift Run Capital Management and John D. Gillespie’s Prospector Partners. In terms of the portfolio weights assigned to each position Swift Run Capital Management allocated the biggest weight to Kearny Financial Corp. (NASDAQ:KRNY), around 7.36% of its 13F portfolio. Prospector Partners is also relatively very bullish on the stock, setting aside 0.63 percent of its 13F equity portfolio to KRNY.

Consequently, specific money managers have been driving this bullishness. ExodusPoint Capital, managed by Michael Gelband, established the most outsized position in Kearny Financial Corp. (NASDAQ:KRNY). ExodusPoint Capital had $0.8 million invested in the company at the end of the quarter. John Overdeck and David Siegel’s Two Sigma Advisors also initiated a $0.6 million position during the quarter. The other funds with new positions in the stock are Paul Marshall and Ian Wace’s Marshall Wace LLP, Schonfeld Strategic Advisors, and Noam Gottesman’s GLG Partners.

As you can see these stocks had an average of 10.5 hedge funds with bullish positions and the average amount invested in these stocks was $134 million. That figure was $131 million in KRNY’s case. Par Pacific Holdings, Inc. (NYSE:PARR) is the most popular stock in this table. On the other hand Zealand Pharma A/S (NASDAQ:ZEAL) is the least popular one with only 4 bullish hedge fund positions. Compared to these stocks Kearny Financial Corp. (NASDAQ:KRNY) is more popular among hedge funds. Our calculations showed that top 10 most popular stocks among hedge funds returned 41.4% in 2019 and outperformed the S&P 500 ETF (SPY) by 10.1 percentage points. These stocks gained 1.0% in 2020 through May 1st and still beat the market by 12.9 percentage points. Unfortunately KRNY wasn’t nearly as popular as these 10 stocks and hedge funds that were betting on KRNY were disappointed as the stock returned -35% during the four months of 2020 (through May 1st) and underperformed the market. If you are interested in investing in large cap stocks with huge upside potential, you should check out the top 10 most popular stocks among hedge funds as most of these stocks already outperformed the market in 2020.