Is Kearny Financial Corp. (KRNY) A Good Stock To Buy?

Is Kearny Financial Corp. (NASDAQ:KRNY) a good bet right now? We like to analyze hedge fund sentiment before doing days of in-depth research. We do so because hedge funds and other elite investors have numerous Ivy League graduates, expert network advisers, and supply chain tipsters working or consulting for them. There is not a shortage of news stories covering failed hedge fund investments and it is a fact that hedge funds’ picks don’t beat the market 100% of the time, but their consensus picks have historically done very well and have outperformed the market after adjusting for risk.

Is Kearny Financial Corp. (NASDAQ:KRNY) a marvelous investment today? Investors who are in the know are in a bearish mood. The number of bullish hedge fund positions dropped by 2 lately. Our calculations also showed that KRNY isn’t among the 30 most popular stocks among hedge funds. KRNY was in 15 hedge funds’ portfolios at the end of the fourth quarter of 2018. There were 17 hedge funds in our database with KRNY positions at the end of the previous quarter.

Today there are numerous gauges stock traders put to use to size up their stock investments. A couple of the less utilized gauges are hedge fund and insider trading moves. We have shown that, historically, those who follow the best picks of the elite fund managers can beat the broader indices by a solid amount (see the details here). 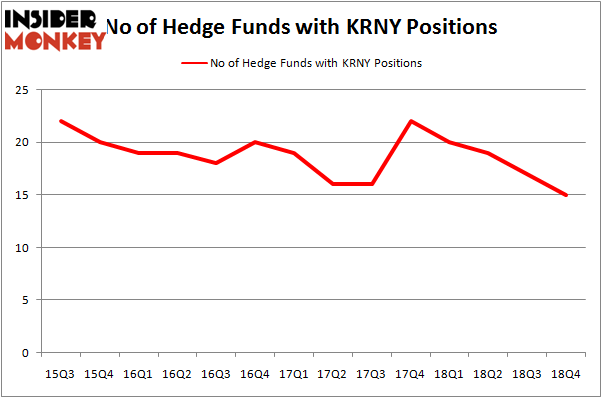 More specifically, Renaissance Technologies was the largest shareholder of Kearny Financial Corp. (NASDAQ:KRNY), with a stake worth $76.8 million reported as of the end of December. Trailing Renaissance Technologies was Empyrean Capital Partners, which amassed a stake valued at $25 million. MFP Investors, Ancora Advisors, and Driehaus Capital were also very fond of the stock, giving the stock large weights in their portfolios.

Because Kearny Financial Corp. (NASDAQ:KRNY) has witnessed declining sentiment from the entirety of the hedge funds we track, we can see that there is a sect of hedgies that decided to sell off their full holdings by the end of the third quarter. Intriguingly, Brandon Haley’s Holocene Advisors dumped the largest position of the 700 funds watched by Insider Monkey, comprising an estimated $0.4 million in stock, and Andrew Feldstein and Stephen Siderow’s Blue Mountain Capital was right behind this move, as the fund said goodbye to about $0.3 million worth. These bearish behaviors are interesting, as aggregate hedge fund interest dropped by 2 funds by the end of the third quarter.

As you can see these stocks had an average of 15.5 hedge funds with bullish positions and the average amount invested in these stocks was $166 million. That figure was $174 million in KRNY’s case. Cannae Holdings, Inc. (NYSE:CNNE) is the most popular stock in this table. On the other hand Esperion Therapeutics, Inc. (NASDAQ:ESPR) is the least popular one with only 11 bullish hedge fund positions. Kearny Financial Corp. (NASDAQ:KRNY) is not the least popular stock in this group but hedge fund interest is still below average. This is a slightly negative signal and we’d rather spend our time researching stocks that hedge funds are piling on. Our calculations showed that top 15 most popular stocks) among hedge funds returned 24.2% through April 22nd and outperformed the S&P 500 ETF (SPY) by more than 7 percentage points. Unfortunately KRNY wasn’t nearly as popular as these 15 stock (hedge fund sentiment was quite bearish); KRNY investors were disappointed as the stock returned 3.4% and underperformed the market. If you are interested in investing in large cap stocks with huge upside potential, you should check out the top 15 most popular stocks) among hedge funds as 13 of these stocks already outperformed the market this year.