The latest 13F reporting period has come and gone, and Insider Monkey is again at the forefront when it comes to making use of this gold mine of data. We have processed the filings of the more than 700 world-class investment firms that we track and now have access to the collective wisdom contained in these filings, which are based on their September 30 holdings, data that is available nowhere else. Should you consider Kearny Financial Corp. (NASDAQ:KRNY) for your portfolio? We’ll look to this invaluable collective wisdom for the answer.

Is Kearny Financial Corp. (NASDAQ:KRNY) the right investment to pursue these days? The best stock pickers are becoming less confident. The number of long hedge fund bets were cut by 2 in recent months. Our calculations also showed that krny isn’t among the 30 most popular stocks among hedge funds.

At the moment there are a lot of formulas market participants use to grade stocks. A pair of the less utilized formulas are hedge fund and insider trading indicators. Our researchers have shown that, historically, those who follow the top picks of the elite fund managers can beat their index-focused peers by a solid amount (see the details here).

What does the smart money think about Kearny Financial Corp. (NASDAQ:KRNY)? 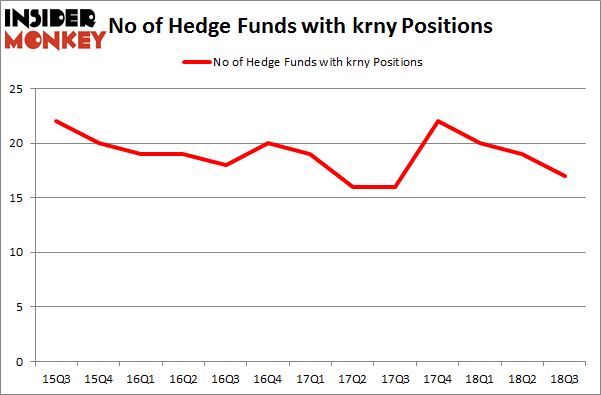 The largest stake in Kearny Financial Corp. (NASDAQ:KRNY) was held by Renaissance Technologies, which reported holding $83.3 million worth of stock at the end of September. It was followed by Empyrean Capital Partners with a $27 million position. Other investors bullish on the company included Ancora Advisors, MFP Investors, and Seidman Investment Partnership.

Since Kearny Financial Corp. (NASDAQ:KRNY) has experienced a decline in interest from hedge fund managers, logic holds that there is a sect of hedgies that elected to cut their positions entirely heading into Q3. At the top of the heap, Ken Griffin’s Citadel Investment Group dropped the biggest position of the “upper crust” of funds tracked by Insider Monkey, totaling close to $1.5 million in stock, and Ken Griffin’s Citadel Investment Group was right behind this move, as the fund cut about $0.6 million worth. These moves are important to note, as aggregate hedge fund interest was cut by 2 funds heading into Q3.

As you can see these stocks had an average of 15.75 hedge funds with bullish positions and the average amount invested in these stocks was $111 million. That figure was $194 million in KRNY’s case. The Simply Good Foods Company (NASDAQ:SMPL) is the most popular stock in this table. On the other hand Safety Insurance Group, Inc. (NASDAQ:SAFT) is the least popular one with only 11 bullish hedge fund positions. Kearny Financial Corp. (NASDAQ:KRNY) is not the most popular stock in this group but hedge fund interest is still above average. This is a slightly positive signal but we’d rather spend our time researching stocks that hedge funds are piling on. In this regard SMPL might be a better candidate to consider a long position.